There was something quite charming, if not just a little frightening, about standing in a lineup at the old tiny, subterranean location of Burrito Boyz.  There was a real sense of community of being in it together - in that long, chaotic lineup waiting for something that was reasonably inexpensive and darn tasty. 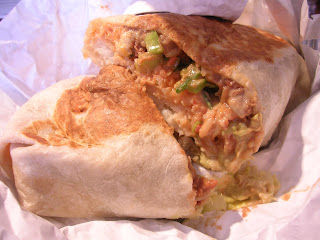 Chicken
Now there are more, larger locations - some of them in the 905 and 519 area codes! The burritos still come loaded - really loaded:  beans, rice, cheese, lettuce, tomatoes, green onion, green pepper, salsa, guacamole, burrito sauce, sour cream, jalapenos and, if desired, hot sauce. We order chicken with everything, and fish minus the sour cream and hot sauce - both on white tortillas. Though still satisfying, the filling in the chicken burrito seemed a little mushier, a little less fresh tasting than the way we remember from the past. We were not impressed by the fish at all. Again maybe memory fails, but we did not remember breading on the fish (haddock, but halibut and shrimp are also available) previously. Also, it had a very strong flavor. Perhaps it was just a not so subtle way of saying fish shouldn't be a burrito filling. 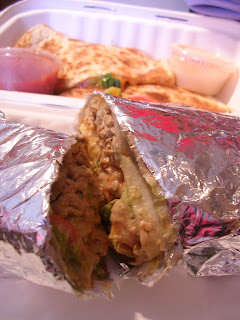 Haddock (foreground), Quesadilla (back)
We also had a cheese quesadilla.  The overgenerous application of veggies somewhat detracted from the perfectly melted cheese, but the quesadilla fan enjoyed it anyway.

While not exactly as remembered, this was still a decent and very filling lunch at a good price.

Photos by Gina
Posted by the cookbook store at 11:00 AM