Getting to the market at Sick Kids this morning was an event in itself. In was one of those moments that happens once in a lifetime:  the convergence of a visit by Queen Elizabeth II and a giant Shriners parade at College and University.  Military bands, Shriners in fezzes, mounted guards, ladies in their best hats and frocks, I saw it all--except the Queen. 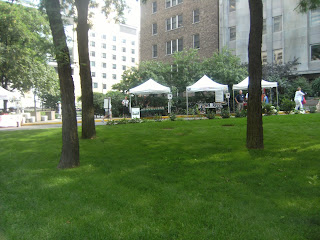 The spectacle at the market was just as fantastic. Both Andrews Scenic Acres and OK Farms had multiple shades of raspberries and currants.  There are still strawberries and rhubarb. At Bosco Farms, there were baskets of heirloom tomatoes along with a whole range of veggies.  At the other end of the market, Carol Collins had her usual great display of carrots--some short and stubby, others long and pale yellow. In from Picton, Jim Hayward of Haystrom Farms had new potatoes, both red and white ones. The best sight of all was sour cherries at the Loffredo Fruit Farm stand. 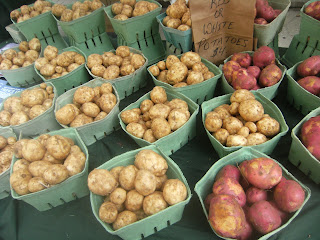 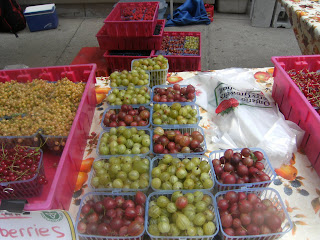 Supper on this very hot evening?  Sliced tomatoes--yellow, red, and "black"--, German potato salad made from Jim Hayward's sebagos, a green salad and devilled eggs.  For dessert, we had a pie filled with sour cherries and black and red raspberries.  Early summer eating at its best.
Posted by the cookbook store at 9:49 AM