Yes, Virginia, hype and reality sometimes intersect.  As anyone in Toronto who is at all interested in food knows, the superlatives have been flying since veteran chef Nick auf der Mauer(Far Niente, the Drake...)opened Porchetta & Co just over a month ago.

While this is the first venue in pig-happy Toronto specializing in the classic Italian pork dish, Sara Jenkins has wowed New Yorkers for over two years with her version.  What is new here is that auf der Mauer uses marinated pork shoulder with prosciutto and cured pork belly rather than whole boned pig, stuffed, and spit roasted (www.porchettaco.com for complete method).

Like the shop, the menu is tiny.  Porchetta is served in a sandwich or on a plate.  There are a soup, three sides(roasted potatoes, braised rapini, baked romano beans) and six extras (two cheeses, rapini, mushrooms, tomato sauce, and truffle sauce). 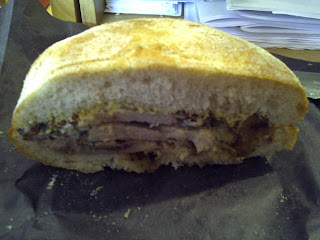 For our portable feast, our designated courier loads up with soup, the baked beans, and two sandwiches. Cabbage and smoked bacon soup elicits visions of a hearty soup with strong, peasanty flavors.  The reality is quite different: a milkily opaque liquid in which sweet shreds of cabbage are suspended along with discreet cubes of bacon and into which a dollop of seedy mustard has been stirred to provide bite for both flavor and texture. A peasant classic has been rendered elegant.  The baked romano beans are a meltingly delicious take on pork and beans.  Both soup and baked beans are enough to make a trip to Porchetta & Co worthwhile. 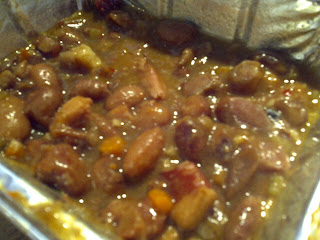 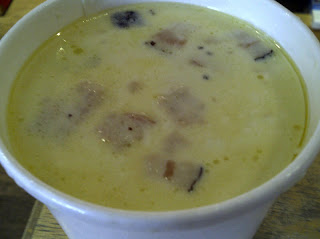 The buns for the sandwiches, from a nearby bakery, are a perfect bed for the porchetta and its crackling.  It is not so crusty that it competes with the latter but is sturdy enough to hold the meat and its toppings without disintegrating,nor is it so flavorful that it overwhelms the herbal accents of the meat.  One sandwich we top with rapini and mushrooms; the other is smeared with truffle sauce(ie truffle mayo)and mustard(no charge.  That mustard is, incidentally, Kozlik's which made the Top 100 list in the January 2011 Saveur.

The meat offers a range of textures from unctuous shoulder slices to crunchy chunks of crackling.  Mushrooms really add nothing but the rapini's bitterness offset the meat's richness while adding a shot of colour in a very beige sandwich. The truffle sauce?  Its presence is an overgilding of the proverbial lily.  Really the porchetta offers so many textures and so much flavor that nothing extra is really needed.

We polish off ever bite of this lunch with our faces wreathed in smiles. Yes, Nick auf der Mauer's porchetta sandwiches are everything the hype has promised---and great value for the price.

Price for a small soup, baked beans, two sandwiches with three extras was $21.55 plus tax.