BOOK REVIEW: Life, on the line by Grant Achatz 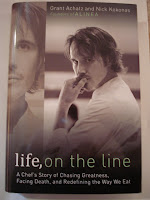 Auguste Escoffier is credited for creating the predecessor of the modern brigade system that most every professional kitchen runs upon.
Julia Child brought the pleasures of French cuisine to the masses of hungry Americans who were tired of eating for sustenance as opposed to succulence.
Ferran Adria took to the culinary arena and said "Never copy" whilst flipping the world of gastronomy on it's head.
Grant Achatz embraced the world of cuisine and pushed it to it's limits. Magically combining food with theatricality, Achatz changed the way food was seen in America. The poster boy of the youthful movement pushing young cooks into prominence, he played a big part in catalyzing the growth and evolution of cuisine in America, past the brilliance of Thomas Keller or Daniel Boulud, and into a new frontier.
And it almost never happened.
The talented chef of Alinea in Chicago (this year named the top restaurant in North America, and 7th worldwide), Grant Achatz was diagnosed with tongue cancer the summer of 2007. Told by doctors that removal of the tongue was the only possible treatment, one of the greatest young chefs to come out of the American culinary scene was faced with sacrificing his livelihood or his life all together.
It would be easy, consequently, to write and focus about Achatz's struggle with cancer and it's effect on his life, but Life, on the line goes beyond the turmoil and begins in the grease-stained hands of a young Grant who was fascinated with the way cars worked. It details his beginnings in a family with a rich history of success in the restaurant business and continues through his time at The French Laundry where the mentorship of Thomas Keller pushed Grant to develop himself and thrive as a chef.
Though it is Achatz on the cover, one must not neglect to mention the inclusion of Nick Kokonas within the pages in a role equally pivotal to the head chef of Alinea. Intriguingly, both Achatz and Kokonas' stories are interwoven in a way that strongly resembles the storytelling of Lost. Momentous events are told from the perspective of both partners in a way that truly immerses and engages the reader. As opposed to running parallels, the two plot lines interweave to provide a more rounded vision of the events leading up to the opening of Alinea, and beyond.
The instant that Grant finds out about his diagnosis is told in a beautiful, yet tragic way that tugs at heartstrings as he tries to deal with the prospect of losing his sense of taste forever. Similarly, the moment when Grant's sense of taste returns after his treatment rivals Anton Ego's Epitome moment in Ratatouille in terms of emotional substance. Visually picturing a frantic Achatz tasting everything in sight as if he were rediscovering food evokes feelings of triumph and ecstasy as even the reader can relate similarly to the first mouthful of food that rocked their world, and the pure bliss and astonishment that followed.
What truly is astounding about this memoir is the resiliency and strength of character Grant has displayed throughout his life. Moments when most people would have shattered into a heap of sorrow and self-loathing, Grant met with intensity and ferocity. Only through such powerfully written material do subtle underlying themes like persistence and triumph over massive adversity draw as much reflection and thought as the great tragedy of the story. Life, on the line closes much in the same fashion that Alinea opened; with a nod to the past, and a look towards the future.