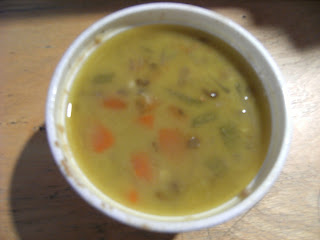 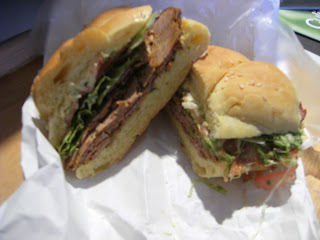 The high quality meat from Olliffe Butchers is amongst the best in the city.  Certainly, it offers value for money but bargain is not a word one normally associates with Olliffe.  Think again while taking a bite out of their soup and sandwich lunchtime special.

We go so late in the day that we miss the back bacon sandwich.  Instead, we try Spanish sausage on a sesame-sprinkled egg twist. The meat, from Metzger's in Hensall, looks more like Dutch-style meatloaf than sausage. Who cares? It has a peppery zing augmented by a mustard mayo.  But guys, this is March, just ditch the anemic tomato slices until July.  Since lunchtime was technically over, we will forgive the limp lettuce.

We have nothing but kudos for the lentil soup. One of the problems with lentil soup is that it is often overcooked into a chalky mess.  Here the lentils are perfectly cooked.  A dice of celery and carrots relieves the soup's inherent brownness while garlic adds extra flavor. Despite a trip of a few blocks on a damply chilly day, the soup is still hot when we get back to the store.

Even more amazing, the cup of soup and sandwich are sufficient for two people--and a genuine bargain.