Dinner Restaurant has been anxiously awaited by the food community for quite some time Dinner, developed by Chef Heston Blumenthal of the Fat Duck, resurrects the culinary past of English cuisine. Each dish is listed on the menu with the date of it's origin, ranging from the late 14th century to the early 19th century. Blumenthal and his long time executive chef at The Fat Duck, Ashley Palmer-Watts (now in charge of the London restaurant), have used contemporary techniques and devices to update each dish to give them a current spin.
We were seated at a prime location in the restaurant, just beside a large window that divided the open kitchen from the dining room, where we could observe all the action, especially the activity at the large wood burning grill/oven ("the Josper"). 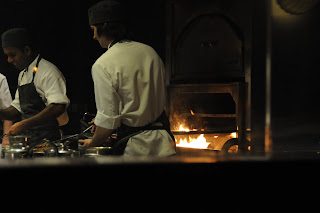 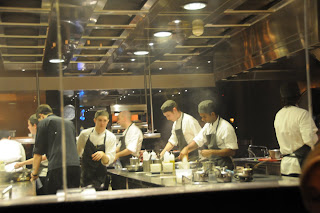 With the description of each dish below, I have noted the date of origin in brackets.
We began with "meat fruit" (c.1500), a bright orange mandarin fruit with vivid green stem and leaves, presented with grilled bread.  Cutting into the "fruit", we found rich, refined chicken liver parfait. The orange skin was compose of a mildly tart mandarin jelly, a nice contrast for the rich liver. 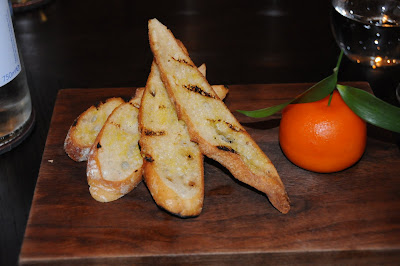 A slow cooked hen's egg was then presented in a bowl with celery, radish, turnip and sweetbreads and then a lamb broth was poured over all. The intensely flavoured lamb consomme (c.1730) went very well with the rich, orange coloured yolk. The flavours of the celery, radish and sweetbreads also further enhanced the contrast between the rich yolk and the lamb broth. 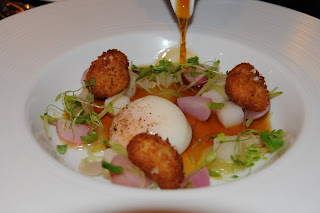 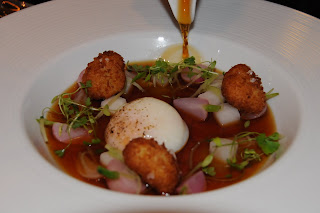 An interesting dish from the past, salmagundi (c.1720) consisted of a warm salad composed of chicken "oysters", bone marrow and horseradish cream. The large oysters (my favourite part of the chicken) were flavourful and tender and the dish was well enhanced by the sharp the horseradish cream 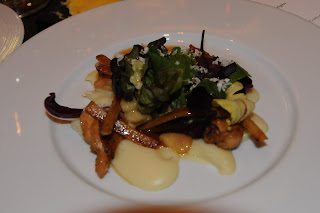 Another favourite I enjoy, when available, is roasted marrow bone (c.1720). Here, the bone was sawed in half and flavoured with parsley, anchovy and mace and presented with lettuce and pickled vegetables. 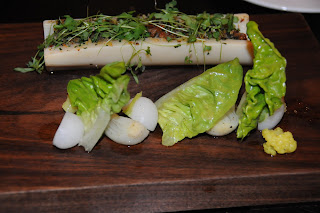 "Rice and flesh" (c.1390) arrived, an intimidating name for a dish. But I loved the intense saffron flavoured rice that was paired with the meaty calve's tail. 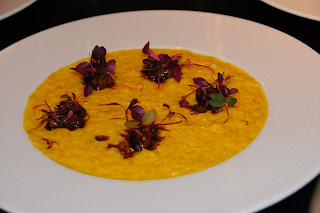 "Savoury porridge" (c.1660) was accompanied by cod cheeks, pickled beet root, garlic and parsley. The texture of this dish was truly pleasing. The parsley and garlic flavours went well with the cod and the slightly sharp taste of the pickled beetroot further enhanced all the flavours. 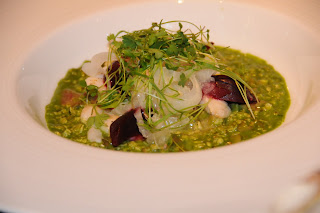 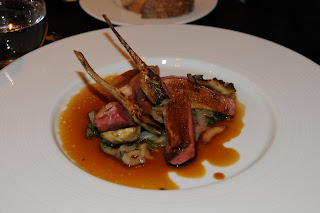 Our last main was wing rib of black angus beef (c.1830), sourced from one of Ireland's premium butchers where the cattle are raised on grass, grains and barley. The rare beef was wonderfully flavoured and cooking in the Josper further enhanced our beef experience. The beef was accompanied by sides of carrots, pointy cabbage and onion, potato puree and fries. The only small slip the entire evening was the over salted potato puree. 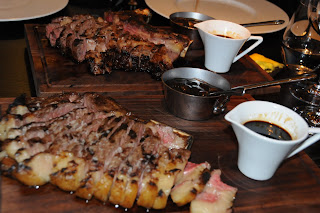 Now we were ready for desserts. We began with "tipsy cake" (c.1810), spit roasted pineapple, vertically rotisserie grilled on a purpose built device was presented with freshly baked, warm brioche, accompanied by a brandy and sauternes cream. 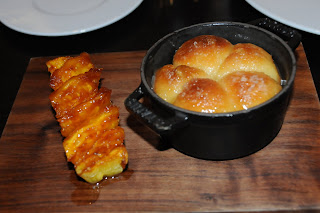 We were delighted with the taffeta tart (c.1660), a refreshing combination of caramelized apple, frommage blanc and pastry made into crisp wafers that resembled the tudor period taffeta material used to make hats. This came with a lovely refreshing fennel and black currant sorbet. 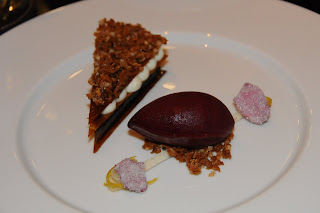 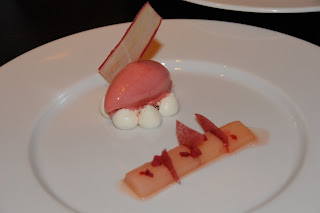 A favourite dessert I truly enjoyed, baked lemon suet pudding (c.1630), came surrounded by apple blossoms and julienned pieces of finger limes and was resting on a lemon caramel and jersey cream. 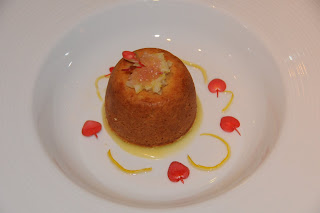 Who could ask for more than a "chocolate bar" (c.1730)? The dark chocolate "bar" incorporated passion fruit jam, a delectable combination and was accompanied by ginger ice cream. 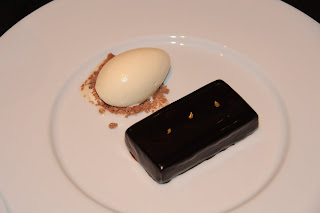 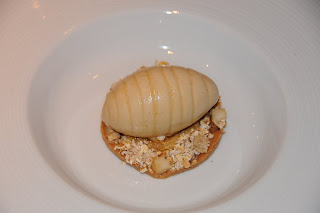 Posted by the cookbook store at 11:59 AM