To Market, To Market July 7 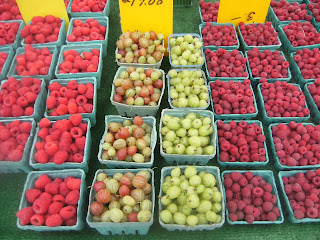 It was a good market day; it was a bad market day.  The bad news first: somewhere along the line my camera went one way and I went another.  So now I have to deal with the question of whether to get another camera or to give up and get a smart phone that will take pictures and generally run my whole life for me.  What to do? What to do?

Thursdays are very busy market days.  I went to three but still missed one--a new market at Bay-Adelaide.
My morning market was at Metro Hall or rather the square that is now named the David Pecaut Square.  I could not tell whether there are fewer vendors this year or whether they are just more spread out. Whatever, it seemed like a bit of a hike from booth to booth.  Well worth it, though.  Warners, right at the King Street entrance, had the first gooseberries I have seen this year while further along Andrews(also at City Hall and the Hospital for Sick Children) had both red and black currants--and how often do you see mulberries offered anywhere? 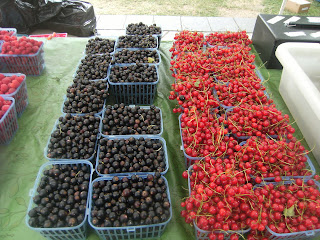 Kar-Dean Fruit Farms had only two products on offer:  verjus from Hughes Winery, and their own sweet cherries, meaty and juicy, the best I have tasted so far this year. 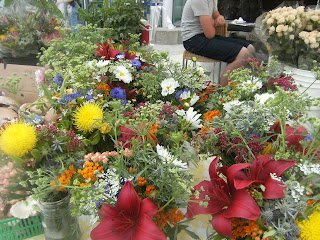 Across the way, Primavera Farms had both cut flowers and plants.  I could not resist a rose geranium.

There were more pleasant surprises at East Lynn in the afternoon.  I caught my first glimpse of sour cherries for this year but decided to wait until next Tuesday at HSC- Lofreddo Fruit Farms has a booth at both markets.Bosco had some decent looking, though small , heirloom tomatoes which were later revealed to taste as good as they looked.  Since the strawberries are beginning to run out, I bought one last box from OK.

My big discovery here was Svetec Farms(www.svetecfarms.com).  They sell meat but also had some clover blossoms on offer.  I did not really want clover blossoms.  What I do want is some organic hay to try one of those French ham-wrapped-in-hay recipes.  Jenny Svetec promises if I email her, she will bring the few handfulls I need.

Finally, a subway ride across town, and I was at Dufferin Grove which was a total mob scene.  It is wonderful for its sense of community.  However, it seems there are fewer vendors selling raw ingredients, and way more selling prepared foods.  Tired as I was, I left empty-handed.
Posted by the cookbook store at 2:20 AM