It's another of those all-too-brief, get it while you can moments!  The damsons are in.  If we are lucky they will be available next week,too.  O.K. Farms had them at Borden Street on Tuesday but the stall was nowhere to be seen at East Lynn on Thursday afternoon.  If you should get some damsons don't even think of trying to pit them before hand .  Cook them and skim off those pesky stones afterwards. 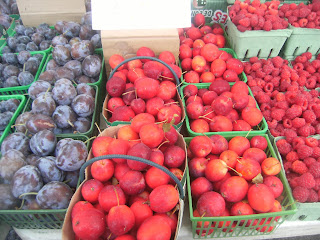 Although there are still berries to be had, the apples are moving in.  Both O.K. Farms and Lincoln Line Orchards have several varieties--some of them not even related to Red or Golden Delicious! Pie bakers,take note:  early Spys and Cortlands are starting to appear. 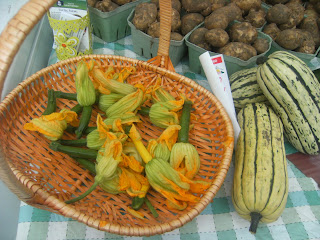 A sure sign that fall is on the way:  there are more hard squashes available--and the zucchini are reaching baseball bat proportions!  Baby potatoes are giving way to more mature examples ranging from the rose tinged yellow flesh of French fingerlings to the blue of the Russian fingerlings.

There are still bushels of tomatoes.  I do not know which variety it was--small and red with peachy shoulders--from Marvellous Edibles but it was one of the best tomatoes I have sampled this year. 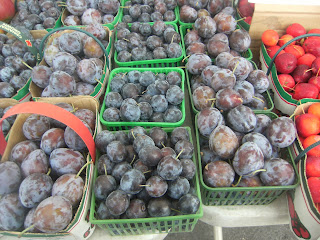 I was happy to find there were actually ready-to-use peaches  this week.  Even as I write there is a dish of roasted peaches and plums cooling on the counter.  I envision a breakfast of same with a dollop of Greek yogurt!
Posted by the cookbook store at 10:49 AM