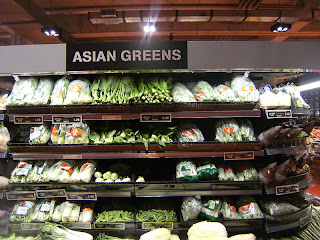 Where Frank Mahovlich swooped in over the blue line,where Johnny Bower stopped pucks with his teeth, where Tim Horton stood guard against marauding forwards, before his name became synonymous with coffee and doughnuts, Maple Leaf Gardens, the revered former home of the Toronto Maple Leafs, is now a shrine to contemporary grocery shopping.

The long promised, oft-delayed, 80,000 square foot plus Loblaws finally opened on November 30th. The building which has always loomed like a fortress over Carlton Street has been transformed into an airy space with huge windows replacing  some of the brick. For the car -centric, there are underground parking spaces which it is easy to grab a cart from what looks like an acre of orange grocery carts.

Perhaps "shrine to contemporary grocery shopping" is a misnomer.  That first day crush was not in the grocery aisles.  It was around the many yards of counter space devoted to prepared foods. Sushi?  Hot soup and salad? Freshly baked Ace Bakery bread? Pizza? Pasta? Check, check, check,check, and check! If you do not wish to haul the food home and mess up your living space, not a problem. There are three areas with seating, two on the ground floor, another upstairs. Students with their laptops are already claiming space. 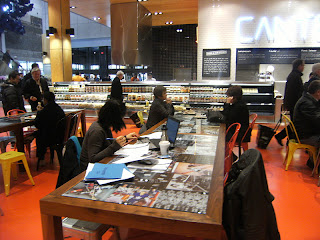 By the end of the first day, the 18 foot cheese wall and huge chunk of chocolate from which people can buy their own personal supply had become the stuff of legend. The deli counter with is vast selection of prosciutto is almost as jaw-dropping. The many permutations of the cupcake is almost as amazing, There are even croissant doughnuts - better than you might imagine. 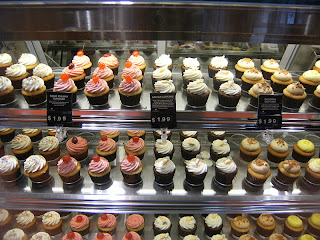 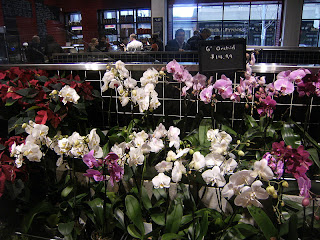 For those who really do insist on cooking, there is a mile o'meat - AAA beef, quality pork, pale veal.  The fish and seafood is labelled to indicate source.  Downtown and crave oysters at 10:30pm?  This is where to go.  There is also a wall of vegetables and a mini wall of Asian vegetables into which some cardoons have wandered. Whatever you want is here in more quantity than you could imagine. The bounty is overwhelming. 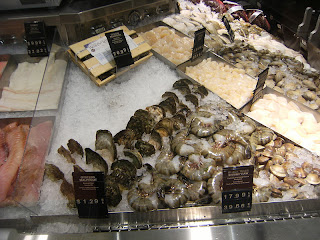 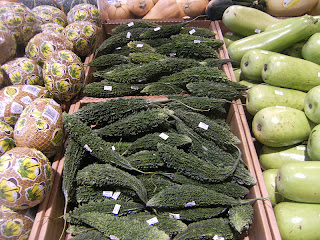 This is a store that is trying to be all things to all people. Not only can you buy your groceries or a ready to serve meal.  You can buy your drugs, visit the medical clinic.  You can throw your favorite shady of Essie nail polish into your cart along with the meat and ice cream.  You can pick up a pot of orchids or a bunch of cut flowers, race up the escalator to buy wine for dinner at the LCBO.  After that, you might want to update your wardrobe at Joe Fresh.  Right next to the LCBO, you can hone your culinary skills at the resident cooking school.

The first couple of days gave the impression of tourist destination. By late Friday evening a new personality was emerging: the grocery store as neighbourhood hub.  Couples pushing shopping carts bickered while trying to select laundry detergent - well, not the pair embracing at what was once centre ice (the dot in aisle 25).  The orchids were starting to droop. The heirloom carrots were looking a little the worse for wear.  The helpful staff appeared happy but on the verge of exhaustion.  Yet, the sense of community building hung in the air. Ignoring the fact that two of the three probably never smiled benevolently in their lives, one could image the ghosts of King Clancy, Punch Imlach, and Harold Ballard smiling benevolently down on us as we stocked up.