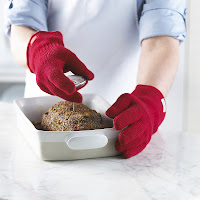 Due to my propensity for using threadbare tea towels to ferry pans in and out of a hot oven, I have an interesting scar on my wrist that’s the shape (although thankfully not the size) of Lake Ontario. And, I’m not alone. Every cook I know looks like he or she has gone a few rounds with one of Harry Potter’s dragons. But perhaps a scar-free future is ours with Trudeau’s Kitchen and Grill Gloves.
These are serious oven gloves made from heat- and flame-resistant (up to 482°F/250°C) aramid fibres, the same stuff used in race-car drivers’ coveralls. Unlike regular padded oven mitts, they’re thin and comfortable with a cotton lining that makes them easy to slip on and off, and silicone grips on the fingers and palms to allow for dexterity. Best of all, they’re long enough to protect wrists and forearms (yeah!). ($39.99/pair; visit www.trudeaucorp.com for retailers.)
Just a Taste
These jolly tasting spoons from Danesco will add élan to the most pedestrian of festive appetizers. Even boring old stuffed mushrooms look good on these (I know, who has the time?). The 5-inch (13 cm) glass spoons come in a set of six rainbow colours. Tempered glass makes them durable and they’re dishwasher safe although not recommended for oven or microwave use. ($11.99/set of six; visit www.danescoinc.com for retailers.) 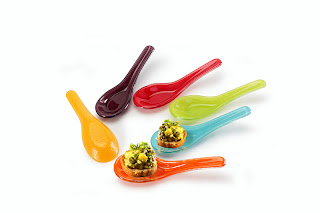 Talking Points
The pioneering company Green & Black’s was the first chocolate manufacturer to produce a Fairtrade chocolate bar. That was back in 1991 and now Green & Black’s Organic is the world’s leading producer of organic and Fairtrade chocolate.
The company’s new Conversations chocolate assortment is a nifty idea for the holiday season. The 40 chocolate squares, in dark, milk, white and butterscotch varieties, are individually wrapped and each features a pithy question, ranging from the fun (“What animal would you choose to be?”) to the frankly serious (“What do you believe is your purpose in life?”). Either way, they’ll help breathe life into any flagging post-prandial chat. ($16.29/180 g; available at major grocery, drug, natural health food and organic stores.) 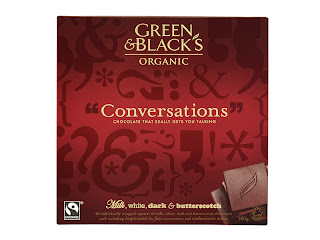 Only in Canada, Eh?
If you felt the earth shift on its axis in November it might have been Canadian early morning coffee-drinkers switching to (yikes!) tea. Tetley launched its new Perk tea last month and, so far, (lucky us) it’s unique to Canada. Regular tea contains a measly 34 g caffeine per cup but Tetley have bumped up the caffeine in appropriately named Perk to 99 mg, which is the same as your average cup of java. Does it do the job? As a confirmed coffee addict, I can report that Perk launched a tantrum-free morning as effectively as coffee. ($4.99/72 bags; available at major grocery and drug stores.) 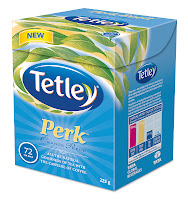 Posted by the cookbook store at 3:46 PM