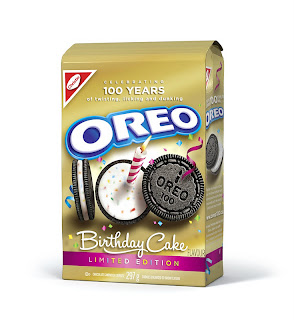 The year 1912 was a busy one. It saw the inaugural Calgary Stampede, the creation of the Republic of China, and the sinking of the Titanic.
More significantly from a foodie perspective, 1912 was the year two food icons were born: Julia Child… and the Oreo cookie. While we have to wait until August 15 to celebrate Mrs. Child’s centenary, the humble Oreo turns 100 on March 6. To celebrate, Oreo have produced a limited-edition Birthday Cake Oreo that will be in stores at the end of this month.
The cookie features two classic chocolate biscuits, embossed with a celebratory Oreo 100th birthday design, sandwiching a special birthday-cake-flavoured filling that’s dotted with rainbow sprinkles. And, I have to say, it’s darn yummy. ($3.59/297 g; available at major grocery stores.)
NICE AS PIE
The folks at Emile Henry have for years been adding colour to our kitchens with their jelly-bean-bright casseroles and pie plates. Now they’ve added a pizza stone to the mix and this one’s a doozy. Available in red, black, fig and olive, the 14 ½-inch (37 cm) stone is made in France from Burgundy clay and is shiny and chic enough to take to the table.

The sturdy stone can withstand temperatures of up to 700ºF (370ºC) so can be used on the barbecue as well as in the oven, and its glazed nonstick surface isn’t scratched by a pizza wheel.
Best of all, for those cooks who don’t have a pizza peel, the Emile Henry pizza stone gives you the option of forming the dough directly on the cold stone and then sliding the whole thing into a hot oven. The cooking time is slightly longer than if you preheated the stone but my test revealed that—with apologies to the purists in Naples—the result is almost as good. ($49.99; visit www.emilehenry.com for retailers.)

GOOD CATCH
Funny how some gadgets can polarize opinions. All the women to whom I’ve shown Trudeau’s Beer Cap Catcher think it’s a grand idea. The men? Not so much.
The catcher combines a bottle opener with a clear plastic reservoir that holds up to 30 bottle caps. At risk of being sexist, I think its chick appeal stems from its potential to reduce the scatter-shot effect that the combination of a bunch of guys, a two-four and a bottle opener seems to have on beer caps.
Whatever your verdict on the Beer Cap Catcher, remember Super Bowl Sunday’s coming up. I rest my case. ($11.99; visit www.trudeaucorp.com for retailers.)

Posted by the cookbook store at 9:31 AM