Didn't see any candlestick makers, but the proverbial butchers and bakers were definitely out to sample Stirling Creamery's Butter Collection at RubyWatchCo.

Located in-oh, shock--Stirling, in eastern Ontario, the creamery has churned out quality butter since 1925, and has had the same master butter maker, Chet Blair, for the last 30 years.  Stirling Creamery's reputation took a huge leap four years ago when its unsalted sweet cream butter made Saveur's list of the top 30 butters in the world.  Incidentally Lanctancia's light butter, also from Ontario, Liberte's goat milk butter, and L' Ancetre Bio Organic Salted butter, both from Quebec also made the select group.

There are four butters in the collection:  Stirling Goat's Milk butter with no salt, colour, or preservatives; Stirling Whey butter, made from the liquid by-product of cheesemaking; Stirling salted butter; Stirling European-style butter or Churn 84 Reserve with a whopping 84 % butter fat--even more than the much celebrated American European-style product, Plugra. 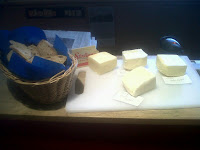 The first step was to sample the butters with their most perfect partner, bread.  Except for the goat milk butter, all were salted, and to some tastes, including my own, too salted. Salt aside, they were all fine butters with solid, rich texture.  The whey version was the deepest yellow while the Stirling salted was lighter but still darker than the regular unsalted version.  The Churn 84 Reserve was densest.  Unexpectedly, it was the goat milk butter that really captured my tastebuds--pure, simple, pale.  Apparently, it develops a more pronounced goatiness if allowed to age for a week or two under refrigeration.  I can't imagine who could keep their hands off of it for two weeks. 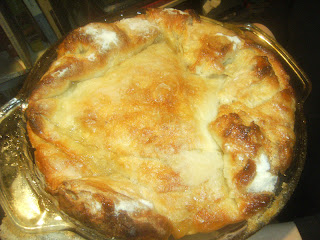 My expectations ran high for the Churn 84 but were dashed, so to speak, by its saltiness. I have used it at home in a kouign amann, the yeasted Breton butter cake.  Even my family noted the saltiness.  Though it is not available to mere mortals, there is an unsalted version marketed to the industry.  Want some, want it now. Visions of croissants and brioche made with this butter and duck eggs are dancing in my head. 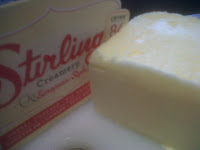 Guests did not have to make do with just sampling the butters by themselves.  Ruby WatchCo Chef Lora Kirk served up two dishes for each butter.  All were scrumptious-- a chocolate and beet red velvet mini cupcake with white chocolate butter cream employing the goat milk butter was particularly over the top.  However, the Churn 84 which was so salty on its own, paired with rosemary honey and served with a slice of heirloom radish, was utterly refreshing.

The best part of the event was the gift bag laden with butter.  Though tempted to keep it  for myself, I thought better of it and shared some--not all--with our customers.  They, too, were drawn to the snowy goat milk butter.  That said, I have to admit that few of them found the others too salty.

Churn 84 is available at the Healthy Butcher.  WholeFoods Market, Scheffler's in St. Lawrence Market, and others carry some of the other Stirling Creamery butters.
Posted by the cookbook store at 9:36 AM