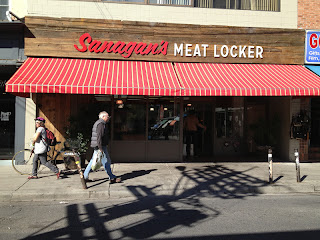 If you are a butcher, it is no longer enough to just sell meat.  You have to at least make an effort to be all things to all people. At The Healthy Butcher, you can stock up on vegetables from Cookstown Greens, or Stirling Creamery butter or, if you are suddenly hit by the urge to start barbecuing, a Big Green Egg is sitting right there. Cumbrae's has superb prepared dishes; Oliffe's makes sandwiches and soup. Sanagan's Meat Locker, newly relocated from its tiny digs further down Baldwin Street, is now in the large space formerly occupied by European Meats. On offer: three sandwiches, rotisserie chicken, and a daily soup and salad. 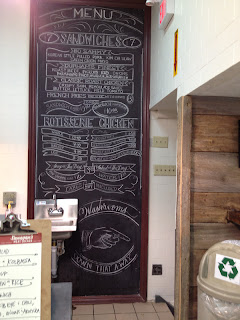 For our starter we chose a slice of one of the terrines.  The mildly gamey venison was accented by the tangy sweetness of a strip of candied orange zest. It was neither too processed nor too chunky.  Just right!


We try two of the three sandwiches and a rotisserie chicken breast. The latter is huge, more than enough for four of us to sample. It would be even better with crispier skin but was both meaty and juicy.

We have no complaints about the sandwiches.  Korean style pulled pork--on the board as Bo Sammy-- features succulent but not too sweet pulled pork, given a jolt of heat with a topping of  kim chi slaw. Its roll does a fine job of containing the filling.  Excellent though it is, the roast beef sandwich, Durham's Finest, is even better.  It offers a veritable symphony of textures on one small bun.  Pickled red onions which give both tartness and a little hit of color, arugula, and horseradish with parmigiano frico are the flavour accents for slices of perfectly cooked roast beef.  But the real star of this sandwich is a whole grain seeded bun.  Both chewy and crunchy, it is the perfect foil for its filling. Incidentally, the breads are baked on site.

We have two sides:  French fries, and salad.  Watch out, Jamie Kennedy.  Although these fries are not quite the thin paragons of the standard Kennedy has set, they are almost as golden, and as well-seasoned.  Given the TTC ride from Kensington market to Yonge and Yorkville, they remained pretty crisp.  Once again, a great play of textures made the salad of cauliflower florets, raisins, and tiny croutons stand out.

We will definitely be back for takeout.  By the way, if you are intending to cook rather than just eat, the meat is excellent, too.

Posted by the cookbook store at 1:12 PM