There is nothing more comforting on a cold winter afternoon than the flavour mash up which typifies food from Bazaar Global Food Bar. We might have thought we never wanted to see fusion food again but the way Hemant Bhagwani (Amaya) conceives it has made us reconsider. 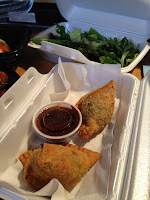 The spinach samosa weds an Indian staple with Mediterranean sensibilities. Although you can taste the mozzarella cheese in the filling, it does not overwhelm the spinach and potato elements, either by taste or texture.  The wrapper is one of the best we have had in Toronto--crispy all the way rather than having the almost inevitable soggy middle. The tamarind dipping sauce is left in its traditional glory. 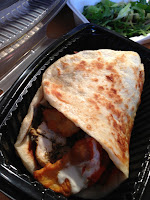 Mexico collides with India in a black olive chicken naco.  You guessed it-- tortillas have been swapped out for naan.  The filling is strips of roasted chicken tossed with pepitas, red onion, cream cheese, and red pepper coulis, fresh greens, and barely-there olives. Yum! A flatter flatbread might have made it easier to eat but really who would complain when something tastes so good. Just to warn you, one portion was more than adequate for two people. 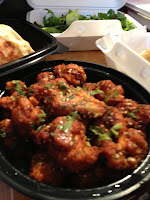 For a really different taste treat, we highly recommend the cauliflower manchurian, a chile and sesame dusted hakka dish.  If you didn't know the main ingredient was cauliflower, you would suppose that it was meat you were eating. Though the crunch is cooked out of the vegetable, this is not a bad thing.  Instead it has acquired a dense sweetness, coupled with the slow burn of the aforementioned chile. It is totally addictive.


A green salad, with the usual mix of designer leaves, is nothing special but does cleanse the palate quite effectively.


An earlier incarnation on Mount Pleasant is now closed, we can only hope the people who hang out on Baldwin Street appreciate Bazaar Global Food Bar for its creative flavour combos at quite reasonable prices. 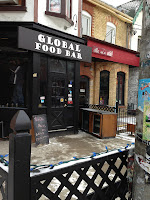 Price: $29.36 for a naco, cauliflower manchurian, and a green salad of generous portion.