Getting take out the first day back after a holiday is probably not the smartest move in the world. Just as book stores are restocking, so too are the food shops.  Nonetheless, we decided to try our luck at the King Street West Italian grocery, Alimento.

With memories of holiday dinners dancing in our heads, our first choice was the Brussels sprout salad. Pale green, generously dotted with bits of pancetta, it looked lovely.  Neither too coarsely nor too finely shredded, it had good texture although it might have been crisper.  However, on the tongue it was bland.  The normally bitter sprouts were tamed to oblivion.  The piave cheese added some richness  but no flavour contrast. The green apple which should have given a hit of sourness was totally MIA!

We also sampled two panino, one with hot capicola, the other with speck.  Each had mozzarella--a rather industrial version--and baby arugula. Alas, the capicola tasted tired rather than hot. Though salty, the version with speck was much better.  The bread, perhaps because it was after a holiday, seemed a bit dried out and could have used a good brushing with olive oil. 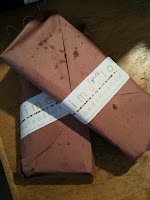 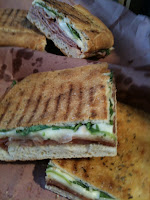 To accompany our lunch, we tried two juices(nectars)from Derby Blue.  The apricot was lovely with a fresh, ripe, apricot flavour.  The blood orange was light, almost watery, without any citrusy punch.

One of our more expensive lunches, we felt it was not good value for money.  In fairness, it might be better to try again in a week not disrupted by a holiday.