HISTORY OF OUR BUILDING AT 850 YONGE ST (at Yorkville Ave) 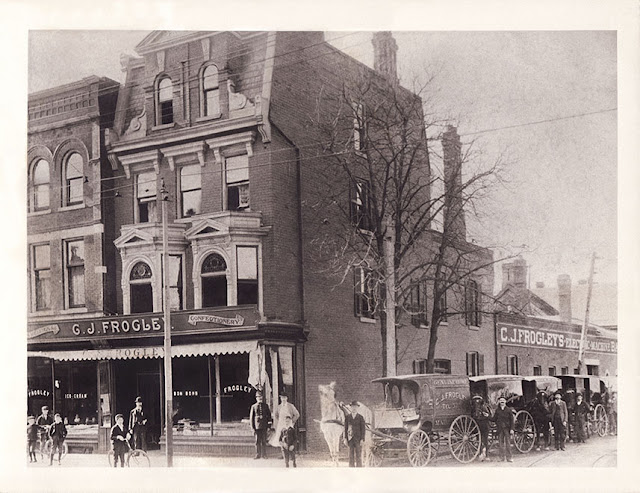 Quite of the blue a package came to the store in 2011 from the great granddaughter of Charles J. Frogley. If you are walking by the store and look way up to the top of our building you will see the name Frogley in the apex. It was explained in the letter that her father had recently died at the age of 94 in Texas and with no relatives other than her brother and herself, who in turn had no children, she wanted to pass on this photo so that it would remain with the building. We are thankful to her for her thoughtfulness.

Charles J. Frogley took possession of the building in 1885 and operated  a confectionery and bakery, where a young 12 year old George Weston was rumoured to have worked for a few years, learning bread making along the way; so lo these centuries later it is only fitting we are here selling cookbooks.

In 2002 a Cookbook Store staff member was doing a research project for her university course and decided to research the building, we use her findings in telling an anecdotal history of our store, there may be some discrepancies and omissions which are unknown to us and for which we apologize.

Of course no one actually knows how old the building is, but Yorkville Ave was originally called William St situated in the Village of Yorkville. Once the village was amalgamation with the City of Toronto in the 1880's, (and you thought amalgamation was a current issue!) numbering of the buildings changed but since 1890 the building has been listed as 850 Yonge St.

In 1875 a young doctor from England moved in and set up his practice on the main floor as well as living in the building until 1884. But it was the next owner Charles J Frogley who would have the biggest influence on the building. The Frogley's wrought iron sign is still at the top of the building. Rooms and apartments were established above the ground floor store and the Frogley family moved in above as did three of his bakers. Charles Frogley continued to occupy the building until 1909.

Over the next few years the building was listed as being a confectioner and also The Eclipse Bakery. In 1923 it was operated as a grocery store for two years. Subsequent business have ranged from antique furniture dealer to book dealer and picture framer. One of the more successful enterprises was a restaurant called The Milk Bar which operated from 1938 to 1948. "Milk bars" were all the rage at this time.

After this period a range of businesses occupied the building from a fur company to a hearing aid services and a fabric store. In 1980 our predecessor was an upstart store called Books for Cooks. Who knew their ground breaking idea for a single genre bookstore would be slightly ahead of their time.

We are grateful for their idea (and the bookshelves) and when the owners decided to close their business in early 1983, well you know what happens next!
Posted by the cookbook store at 1:38 PM