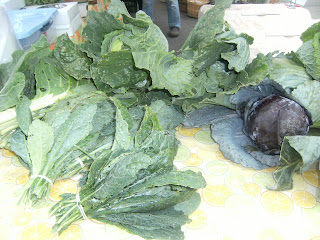 The farmers markets over the last week reflect the change in temperature and the shorter days. There are more root crops, more hard squash, cabbages, leeks, onions, potatoes, and apples.  Yet there are still holdovers from summer.  Several stalls, particularly at Thursday's Metro Hall market, there were still raspberries, strawberries, and blackberries.  There were also peaches, though a little crunchy and a little anemic. 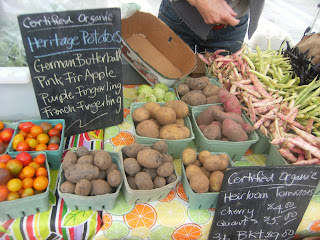 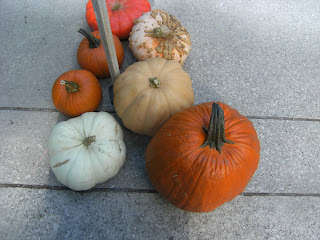 Both Thames Valley Melons at Metro and Marvelous Edibles at Borden Street had an array of weird and wonderful squash, reminders to start planning Thanksgiving dinner. 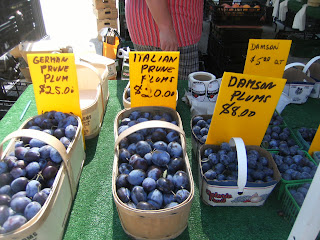 Warner Farms again at Metro(they are also at City Hall on Wednesdays) had a great selection of plums especially German and Italian.  While no one else has had damsons for weeks, they still had them.  They also still had State Fair apples.  Alas, they were a bit mealy but should be fine for sauce.

Bosco Farm's(HSC Tuesday, Borden on Wednesday, East Lynn Thursday, Liberty Village Sunday) cauliflower has been outstanding this fall.  Free of the black smudges which sometimes settle on cauliflower, these taste as good as they look without any bitterness.  For peoples wanting more visually impact, a stall at Metro Hall had not only white but "cheddar" and purple.

Much missed at HSC, Borden, and East Lynn, O.K. Farms is still at Liberty Village until Thanksgiving.  Try some of their Macoun apples, a cross between Macs and Jersey Blacks, good for both eating out of hand and cooking.

Best known for their pork products--juicy double pork chops, Old World quality sausages, this week Marvelous Edibles also had heirloom chickens, specifically barred rocks. In their feathered form, they are the that beautifully fluffy black and white striped variety.  Though a little skinny, this was a tasty bird when roasted with lemon, rosemary, garlic and bacon.
For weeks I have been longing for carrot cake. Though I was about to grab my favorite Parisienne carrots-those stubby, almost round ones, carrot grower extraordinaire Caroll Collins told me to stick to traditional carrots, for "more flavour bang for the buck".  I took her advice and was not disappointed.
Posted by the cookbook store at 11:08 AM