I’ve lived through the Rock ’n’ Roll era, I’ve done hot pants, I’ve even embraced Twitter but now that I’m heading into the Creaky Years, I’m loving Trudeau’s new Stress Less kitchen tools. Ergonomically designed to literally take the pressure off in the kitchen, the Stress Less line includes a garlic press ($24.99) that cleverly relies on your body weight to mince the cloves (you lean on the press rather than wield it by hand) and a can opener ($24.99) that requires 50 percent less effort than conventional openers. But, my favourite is the automatic corkscrew ($99.99). Who needs a man? (Visit www.trudeaucorp.com for retailers.) 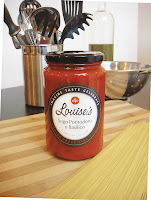 Although grocery stores offer entire aisles of ready made pasta sauce, I’ve never been a fan. How hard is it to simmer up a from-scratch tomato sauce? But, I’m hooked on Louise’s Sugo Pomodoro e Basilico from Louise Prete Fine Foods. Michael Malleau, chef-owner of the catering company named for his Italian nonna, grew up with her homemade tomato sauce and though it was good enough to share. He’s right. Long simmering ensures rich, deep flavour with just a little kick of chili, and it’s the first jarred sauce I’ve tried where the flavour of olive oil comes through and you can actually see leaves of fresh basil. ($7.99/737 g; Pusateri’s Fine Foods; Upper Canada Cheese Company, Jordan Station.) 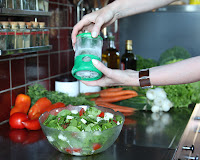 The trade shows us gadget gurus trawl are usually awash with useless kitchen tools and we strike gold only occasionally. I thought the Fresh Mill would be another dud but I was wrong. It comes from France so that should have been a clue it could enhance my batterie de cuisine. Resembling a rather overweight pepper mill, the Fresh Mill lets you freeze herbs quickly and easily. You pack the top of the grinder with fresh herbs (soft-leafed ones—basil, dill, chives, mint and parsley—seem to work best) then pop it in the freezer. Once frozen, the herbs can be ground directly into a sauce, stew, salad, whatever. Since freezing makes them discolour, I wouldn’t use the milled herbs as a garnish but for quickly adding zippy flavour to your cooking, the Fresh Mill is a winner. ($19.95; William Ashley, IQ Living, McEwan, AGO, Stack Home Accessories, or call 1-877-243-9463 for retailers.)
Posted by the cookbook store at 4:07 PM