Trust the Italians to take a gadget as mundane as a trivet and turn it into something oh-so-chic. Designed by Legnoart, the trivet resembles a perfect cartoon cactus (albeit in crazy colours, including pink, red, white, orange, black or bright green) set in a ceramic pot. Pull the “cactus” from the pot and it springs into life as a three-pronged, non-slip trivet. It’s so utterly cute you might be tempted to display it on your mantel. ($44.95; call 1-877-243-9463 for retailers.) 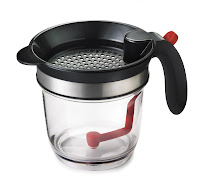 SEPARATION ANXIETY
As we approach holiday gravy season, the cooking world divides into two camps. In one are the cooks who swear by fat separators, those pitchers which are supposed to allow you to magically pour off sparkling jus, leaving the wicked fat behind. I’m firmly planted in the other team which does its best to scoop off most of the fat with a spoon, then gives up and carries on making the gravy anyway, on the basis that what your guests don’t see won’t hurt them. In short, most conventional fat separators do a lousy job.

Just in time for manhandling the jus from your holiday turkey, Cuisipro has launched a fat separator that makes sense. The pitcher features a strainer that catches any flavourings in the jus then, once it’s settled and the fat’s risen to the surface, a nifty button on the handle releases a plug in the base of the pitcher to empty the de-fatted jus. The 4-cup (1 L) heatproof pitcher, made from made from BPA-free Tritan TX-2001, is top-rack dishwasher safe. ($34.99; specialty kitchen stores, or call 1-866-306-3672 or visit www.browneretail.com for retailers.)

ALL BUTTERED UP
If you’ve traveled a lot in Europe you may have noticed that the butter across the pond tastes, well, more buttery than ours. Most European butter contains a minimum of 82 percent butterfat, while in Canada the standard is 80 percent. Doesn’t sound like a lot but, as pastry chefs here have said for years, it makes a huge difference in baking. More butterfat means less water which yields better-tasting and more professional-looking pastries, breads and cookies.

So, as a butter lover, I’m thrilled that Stirling Creamery has launched Churn84, an 84 percent butterfat butter. A batch of homemade shortbread made with Churn84 (I know, it’s a tough job) had a more malleable, easy-to-handle dough and a much richer flavour than one using a supermarket brand. And, eaten au naturel, Churn84 tastes like the single ingredient that appears on its label: cream. (From $5.49/250 g; visit www.stirlingcreamery.com for retailers.)

Posted by the cookbook store at 10:52 AM