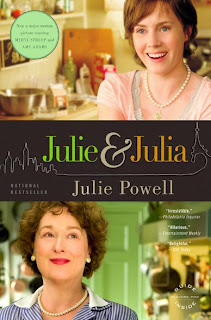 Many customers at the store have been excited to see our book display in preparation for the upcoming movie Julie & Julia. I was lucky enough to catch an advance screening of the film and was pleasantly surprised by how much I enjoyed the experience.

Screenwriter and director Nora Ephron (Sleepless in Seatle, When Harry Met Sally) skillfully combines blogger Julie Powells’s first book with Julia Child’s memoir, My Life in France. The book Julie & Julia is about Ms. Powell’s experience cooking her way through Mrs. Child’s Mastering the Art of French Cooking, Vol. 1, while My Life in France documents the years in which Julia Child initially learned to cook, developed her insatiable passion for French food, and laboured to complete and publish the same book on which Powell focuses.

The story seamlessly bounces back and forth between New York circa 2003 and late 1940s Paris, documenting both Julie’s and Julia’s challenges, triumphs, sorrows and joys. As is usual for most book-to-screen adapatations, noticeable liberties are taken with both stories, but the spirit of each book is truly given justice. In fact, after having enjoyed each of these women’s memoirs, I would venture to say that the interlacing and juxtaposition of the two lives makes for an even more enjoyable experience than the two separately.

Amy Adams’ Julie Powell wins you over as a regular gal fighting her way through the challenges of French cookery (and is much less annoying than the trailer makes her appear). Meryl Streep is her usual phenomenal, chameleon-like self, portraying the excitable, unmistakable Julia Child, with a dead-on rendition of that marvelous warbling, sing song voice proclaiming to all, “Bon appetit!”

For a more in depth version of this review visit here.
Watch the trailer here.
Opens Friday, August 7th.

To Look Forward To:

Join us at the store on August 15 to celebrate what would have been Julia Child's 97th birthday. More details to follow.
also,
Julie Powell's second book, Cleaving: a Story of Marriage, Meat and Obsession about becoming a butcher is due out this November.
Posted by the cookbook store at 11:44 PM