To Market, to market

I have just tried one of the best potatoes I have ever eaten. My “Potato Lady” aka Ayse Akoner, with husband Jens Eller, is at Bloor/Borden market on Wednesday afternoon. This week they had two varieties that they have grown for the first time this year: German butterball and Lindzer deleketess. The German Butterball tastes like mashed potatoes with loads of butter and cream -- but without actually adding the butter and cream. Not only do they taste great, but they have what I can only describe as a wonderful “mouth feel”, creating a delicious fullness. The Lindzers , a fingerling, have a really unusual flavour, rather mineralish, with an almost astringent
aftertaste. Both will be available for several more weeks. They also still have warba potatoes, a pretty pink-tinged cream. The French fingerlings are also just starting. 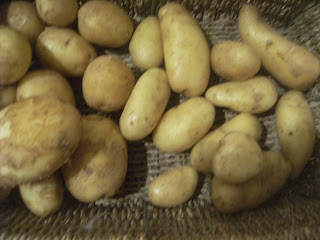 Thames River Melons, which is at a number of markets including City Hall on Wednesday and Metro Hall on Thursday, as the name suggests specializes in melons. But, they also have the best corn I have tried this year. Gourmet sweet is the variety currently on sale. Too late for “Navajo” but both are sweet, tender and require minimal cooking time. For melon fans, they expect charentais melons in about two weeks.
Posted by the cookbook store at 5:30 PM