To market, to market

A sight I did not want to see just yet: winter squash. I do not want to know the end of summer is within sight when I still have not had a decent peach. That said, the peaches at the Bizjak Farm stand at Borden/Bloor last Wednesday were close to my idea of peach ripeness so they should be fine this week. Yet a peach I tasted on the weekend from another grower was still crunchy.

Potato Lady (Marvellous Edibles) at Bloor/Borden has ever more varieties of potatoes. Ruby Gold is almost as good as German butterball. She also has many heirloom tomatoes, as lovingly raised, and as proudly presented as the potatoes. 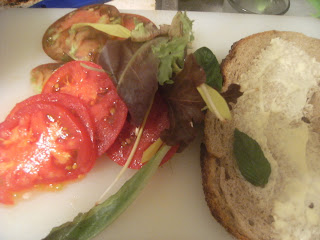 Another of my favourite vendors, Collins, have something I have neverseen before in a local farmers market -- artichokes. Caroll Collins says that although they are not alone in growing artichokes, there are not many people growing them in Ontario, especially for commercial sales. In California, artichokes are a perennial plant while here they must be planted annually. The Collins are at Sick Kids on Tuesday and Borden/Bloor on Wednesday. 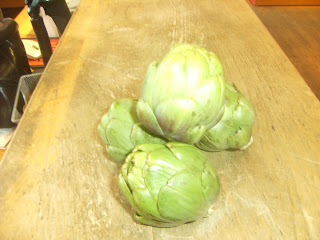 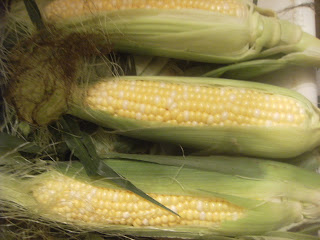 Spending more time than I intended, I get to Withrow Park just at
closing time. This is its second year, some of the vendors are also
at Brickworks, the Green Barn, and Dufferin Grove. Despite my
tardiness I still manage to get Webers eggs.
Posted by the cookbook store at 12:42 PM