In anticipation of the opening of Pizzaiolo on our block,  we have a few slices from the location a few blocks south of us.  We cover all the bases:  meat, vegetarian, and vegan. Like most pizza slices, these do not win prizes for looks -- pizza slices usually sit long enough to look a bit dried out. 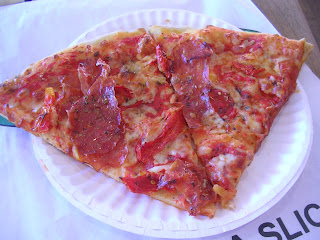 Our meat choice, the Soprano, features sopressata (Italian dry-cured sausage) with sundried tomatoes, gorgonzola, and mozzarella. The sopressata tastes much better than the usual cheap pepperoni. 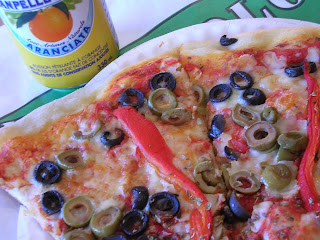 The Casino with black and green olives, roasted red peppers, and mozzarella is also better than expected, and happily less salty due to the cooks not being too heavy-handed with the olives. 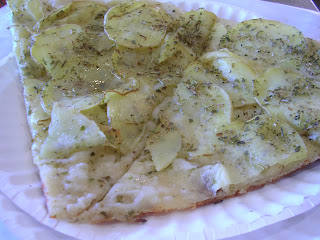 Fredo, the vegan pizza, features potato slices with olive oil, fresh oregano and rosemary. Often when potatoes are used on pizza they are undercooked, and either under or over-seasoned.  Pizzaiolo has gotten

it right with sufficiently soft potatoes and enough herbs to enhance without overwhelming the flavour of either the potatoes or crust.

The crust is the star of these slices.  Neither too thick nor too thin, this tasty base supports the toppings without collapsing between plate and mouth.

Our three slices, which could have fed six, along with one San Pellegrino Arancita, came to $15.71.

Posted by the cookbook store at 6:50 PM