We go off to Delica Kitchen with high hopes and visions of the old Ace Bakery café dancing in our heads since its owner, Devin Connell is the daughter of Ace Bakery founders, Martin Connell and Linda Haynes. In fact, the opening of Delica coincides nicely with the autumn release of Devin and Linda's mother-daughter cookbook Two Dishes. 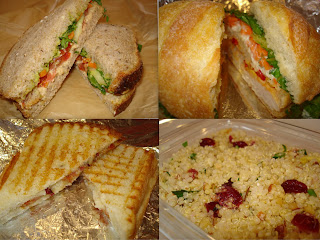 One of the things we really like about these sandwiches is that they are not enormously large.  Too many sandwiches are huge, messy affairs that quickly fall apart.  And, if you do manage to finish one, you feel
sluggish for the rest of the afternoon.  These hold together well, not only physically but in taste as well.  No particular element stands out -- it is just one balanced whole.

The same goes for the quinoa salad which one of us groaned at in anticipation of the ubiquitous lunchtime item.  She quickly changed her mind after tasting it. Often overwhelmed by the acidity of vinegar or lemon, this quinoa with just a hint of lemon and a shower of herbs, cranberries, and almonds is very satisfying. 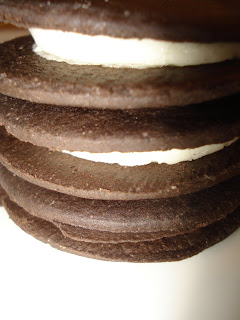 For us, each a confirmed sweet tooth, the highlight is the homemade oreo cookie.  Though not quite as crisp as the manufactured version, the dark chocolate wafers have that indefinable oreo flavour, while a hit of salt cuts the sweetness in the soft slather of vanilla cream filling. No other homemade version of the icon cookie has gotten it so right.

Three sandwiches, one made a combo with the quinoa,  plus three "oreos" cost us $31.58.

Photos by Gina
Posted by the cookbook store at 1:14 PM