Cruising through the new Bloor Street East Longo's, we noticed a salad bar and better yet, a pizza oven going full blast. Always eager for new lunchtime possibilities, we were drawn by the idea of freshly baked pizza with an interesting salad on the side.

There was a large gap between eye and palate appeal. Everything thing looked good. Once bitten into, this food quickly lost its charm. Sold by weight, our large salad comprised three selections:  Singapore noodles, traditional Greek, and two small slices of salmon. The acrid burn of commercial curry powder overwhelmed the flaccid noodles, flecks of what might once have been carrot, bits of onion, and a chunk of chicken (we do mean one chunk of chicken). The Greek salad, the best of the lot, was nonetheless waterlogged. Though plentiful, the two varieties of olives tasted the same, neither with any subtlety. The salmon, although it appeared to be peppered and had grill marks, offered only a stronger than expected fishiness and little else. To add insult to injury, it was overcooked. 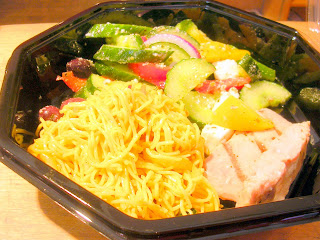 Atop the thin crusted pizza, the cheese was gilded but very rubbery. Under it, the tomato sauce had the unmistakable acidity of an over-processed commercial product. Though thin, the crust managed to be doughy. Despite the fiery oven, this pie cooled quickly on the short haul back to the store. 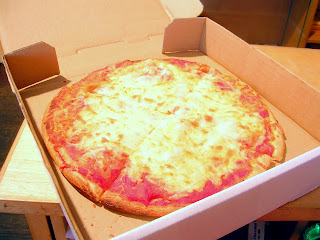 A bottle of Santa Cruz lemonade, purchased on special, was a bit sweet but still the most acceptable of our purchases. 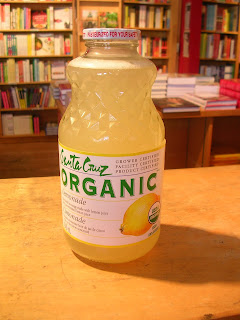 This disappointing lunch could best be described as an industrial sheep in artisan clothing.