I'm like the Four Tops--I can't help myself.  Once the farmers' markets open for the season I just can't help dashing from one to another. 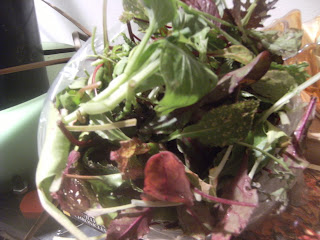 Sorauren was one of the first to re-open outside.  I missed the first week but got there the following Monday when my first purchase was the De la Terre sourdough that I have pined for since last fall.  The Singhs from Brampton had only a few bags of salad greens now but eagerly announced that they have several varieties of beets, carrots, and if I remember correctly, 34 types of potatoes planted.  There is great news from Field Sparrow Farm. As long as the new baby is not early,  the Bakkers will bring their beef to our June 19th market day.

Gardeners should visit both the Sorauren and Riverdale markets to find herbs, vegetables, and flowers.   Two of the best vendors are Match Box at Sorauren and Urban Harvest, at Riverdale and several other markets.  Each sells both seed and seedlings.

A new feature at Riverdale is made-on-the-spot French fries.  One of the young cooks from JK at the Gardiner is frying them up, tossing them with herbed salt, then selling them in paper cones for $4.00.  If so inclined you can embellish them with a squirt of lemon mayo.  So sublime we had to have a second order.

While I failed to see any rhubarb at Sorauren, several booths at Riverdale had it. In my kitchen, Rolling Hills Organics rhubarb  morphed into rhubarb and lemon cream tart, a recipe from Tamasin Day Lewis's Art of the Tart.  Scrumptious!

Rolling Hills is also selling Dexter beef.  This Irish breed is rare in Canada. Although the ground beef and tiny strip loins were rather average, a rib eye was spectacular--juicy, beefy with a complex sweet finish.  All three browned beautifully.
Posted by the cookbook store at 9:00 AM