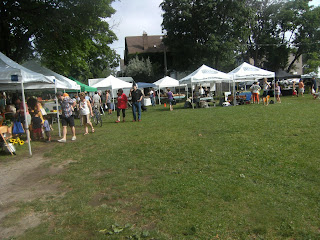 This was my first time at Withrow Park market this year. The Webers, Mennonite vendors of meat and eggs, were absent-but they do go to Green Barn so they have not truly disappeared.  Also, no empanadas, one of my main reasons for going there last year.However one of my favorite vendors from Sorauren is now  here--Mr. Singh from Brampton.  Usually there is no sign for this stand but it now has a hand lettered piece of cardboard proclaiming "The Fresh Veggies". This time the fresh veggies do not include rodina beets which I bought from this stand last year.  Mr. Singh explained that he gave up on them for this spring since they are also much admired by four-legged non-paying customers.  He may try a late-summer crop.  He did have some tiny round beets which I have now turned into pickled beets!  I also got a bunch of small, perfect red onions.  This was a day for red vegetables--Small Potatoes Farm had lovely little radishes.

Although there were still both raspberries and strawberries, stoned fruits are beginning to take over--plums, apricots and peaches.  Although several other markets have a flood of tomatoes, here it was more a trickle with just a couple of stands offering a limited selection--including Haystrom Farm which also had delightfully flaky-skinned new potatoes.

As usual, the St. John Bakery was there with its seductive breads. 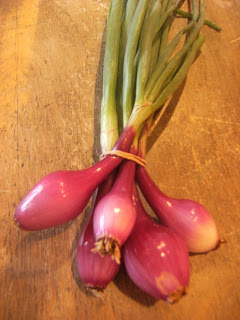 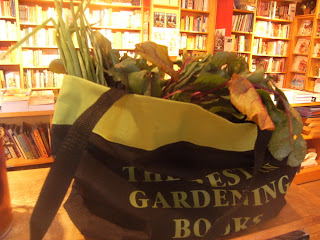 Posted by the cookbook store at 10:21 AM