This is my first trip out to East Lynn this year.  It is very much a neighbourhood market with lots of young families.  Beware the stroller gridlock!  Part of the MyMarket group, East Lynn has several familiar faces: Belangers and Esker Ridge who are also at Liberty Village, as well as Bosco, O.K. Farms, and Loffredo Fruit Farm.

Although there are still peaches, raspberries, and even strawberries, apples are gradually moving in.  Lincoln Line's free samples convince me that lodi apples are similar enough to harvest apples that I should buy some for apple sauce.  But their tart crispness makes them, to my taste, a good eating apple, too.
At O.K. Farms, they have what may be the last of the elderberries which, like everything else this year, have ripened more quickly than usual.  This week's peaches are disappointing--mealy rather than juicy. 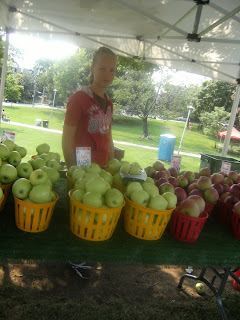 As usual, Esker Ridge has a wonderful selection of heirloom potatoes, cucumbers, and tomatoes.  Among the tomatoes, I score a White Queen and Green Zebra .  I also try an apple cucumber. Short and almost round, it barely resembles a cucumber, but its flavour is classic --and what is missing from supermarket cucumbers. 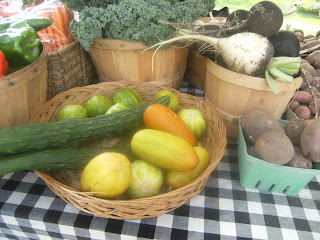 Later dinner is all vegetables:  sliced tomatoes with buffalo mozzarella drizzled with olive oil, cauliflower salad, cucumbers sprinkled with Maldon salt, and pickled baby beets.
Posted by the cookbook store at 5:40 AM