A new month, still the same old heat and humidity.  I have the greatest admiration for all the vendors who endure the heat for hours on end, so the rest of us can have fresh fruits and vegetables.
After overdosing on corn earlier, our household had had a little break  but were now craving it again.  The ears I chose from Bosco's were not that promising, the husks a little dried out, the cobs larger than I prefer.
I was not more reassured once the husks were removed since the kernels looked quite mature.  Amazingly, once cooked, the peaches and cream type corn was tender and sweet.  In this case, I certainly could not judge a cob by its cover.  The same stand also had a beautiful selection of eggplants in all shapes and sizes. 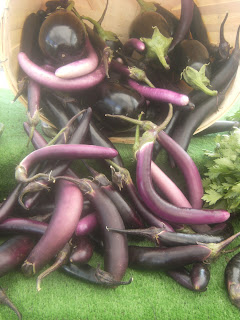 Determined to make crabapple/elderberry jelly, I was dismayed to find that O.K. Farms did have more crabapples.  As it happened, they hadn't bothering bringing them since no one had been buying them.  They have promised some for next week.At the moment their tables are piled high with apples including early Spy and the current darling of the apple world, Honey Crisp.

Another good piece of news concerning next week:  Marvellous Edibles will have more bacon.  In the meantime, I bought their latest sausage, smoked wild apple with sage and calvados made with meat from their pastured Berkshires. They were delicious, served up with their pink fir apple potatoes.  This is Ayse's first successful crop of this  knobbly heirloom variety.  Although they are supposedly best boiled, they were just fine roasted with olive oil, salt, and pepper. 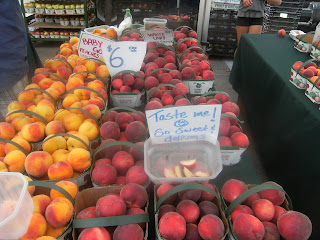 Bizjak Farms had four varieties of peaches--Baby Gold, White Lady, probably the best Red Havens I have tasted this year, and Blazing Star. I bought the deep burgundy and very fuzzy Blazing Stars since it is just about the end of their season and for novelty's sake, White Lady.  This white variety is sweet with little acid to balance it. 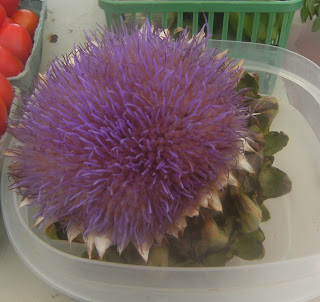 The most stunning sight of the day was an artichoke in full bloom at Collin's stand.  Though I have seen pictures of a flowering artichoke had I never seen an actual one.  More than anything it looked like a wild a wonderful cactus flower. In amongst the familiar fruits and vegetables, it gave an air of the exotic.
Posted by the cookbook store at 9:51 AM