Jamie Kennedy deserves another medal for his inspired, highly creative heirloom pork themed menu, a degustation of pork put together for a group of wine and food lovers. With the passionate participation of one of the country’s best producers and purveyors of fine beef, pork and lamb, Cumbrae’s own Steve Alexander, the event may have been one of the finest for experiencing a rustic but sophisticated take on regionally sourced pork products of different breeds.

We began with apps, tortiere strudel, a clove, and onion flavoured ground pork and potato mix. The tortiere was topped with tangy mustard pickle, a perfect complement. 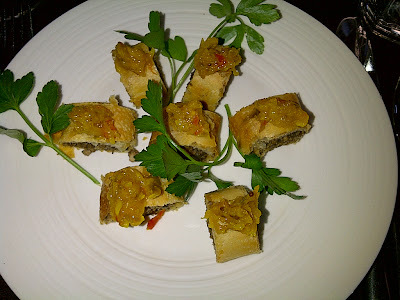 Then, we were presented with crispy skinned, panko crusted blood sausage croquettes that were topped with a small slice of lemon and a caper. The creamy centre was flavoured with onion, nutmeg and black pepper. 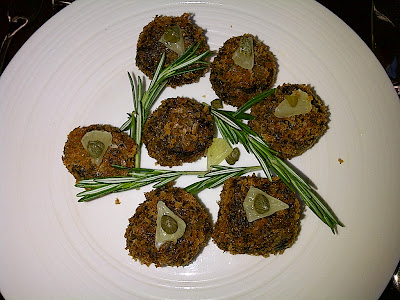 Our final app, crispy confit of wild boar topped with cider mignonette, was sitting on an apple chip. Even the fat of this incredibly flavoured breed had such a delightful flavour and texture. 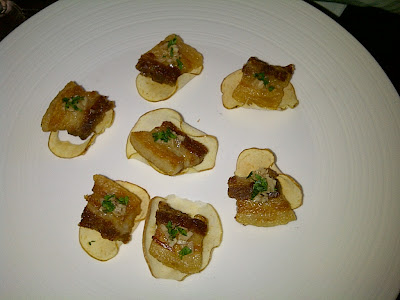 Lentil soup followed, and was topped with grilled, sliced Berkshire pork sausage flavoured with fennel. The flavours of the fennel and pork just bloomed on your palate. The soup was spiced with caraway, lemon zest, garlic and dill. Can you imagine how these wonderful flavours all came together! 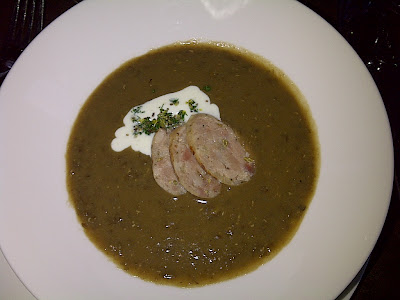 Next, a humble sounding Yorkshire Landrace breed pork burger came stuffed with a layer of head cheese and was accompanied by simmered, sliced root vegetables. When sliced, this was an exceptionally juicy pork patty and when tasted, was a miracle of delectable flavours! 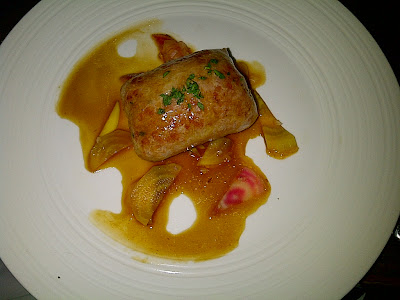 Piglet was deboned and rolled, spiced with rosemary and black pepper, slow poached, then fried to a crispy skinned doneness. This process intensely concentrated the pig and rosemary flavours. The piglet roll was presented on sliced mushrooms and potato, pommes Anna. Another highly successful presentation of pork. 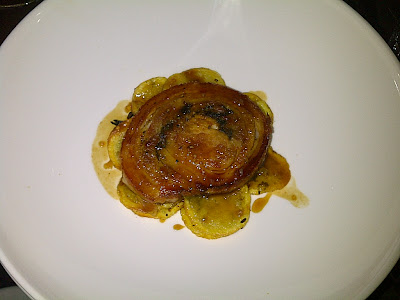 We were then presented with the piece de resistance: Crown roast of St Canut suckling pig (porcelait de lait) (weaned from it’s mother and only fed 22% fat cream in last 8 weeks of it's life). The roast was brought to us with burning rosemary branches.  What an incredible, mouth watering aroma of the burning rosemary and roasted pork, just from the oven! 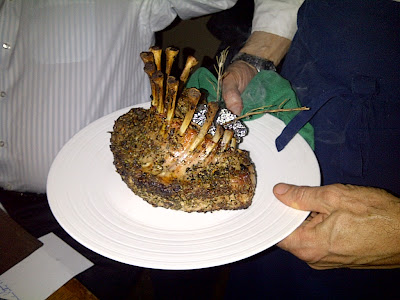 The chop from the crown roast was presented med rare, with a sauce of the juices, vermouth and garlic scraped from the outside of the roasted pork. Delectable!! 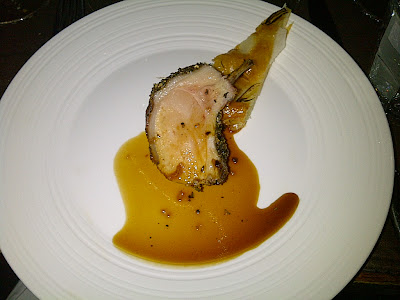 Finally, tarte tatin with maple candied bacon and maple syrup ice cream. What an exceptional tasting dessert. The flavours and textures of this dish were addictive! The dessert was perfectly paired with an 1989 Chateau Doisy Vedrines sauternes. 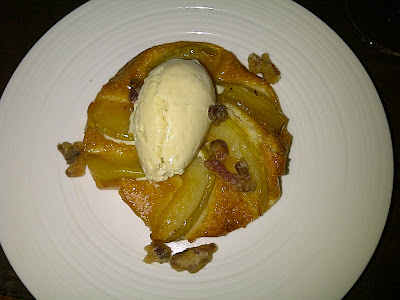 Despite having just returned from Europe after just experiencing dinner at Heston Blumenthal's new resto "Dinner" and lunch the following day at his famed resto, The Fat Duck, followed by dinner, later that week at the "world's #1 resto, Noma, in Copenhagen, I could not rave enough about the experiences of this meal. Once again Chef Kennedy's imaginative, grass roots, artisanal touch meets with incredible success.
Posted by the cookbook store at 6:36 PM