A special dinner honouring Jamie kennedy, the Order of Canada awarded chef, was organized by his staff, former apprentices and sous chefs and took place at the Gardiner Museum restaurant. Attendees were both admiring food industry people and patrons. 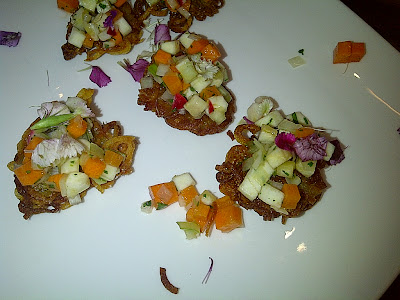 To begin, Chef Dan DeMatteis did an outstanding, intensely flavoured, chilled tomato consomme with preserved and fresh Vicki's Veggies cherry tomatoes and a nice background basil flavour. This was my favourite course of the evening. 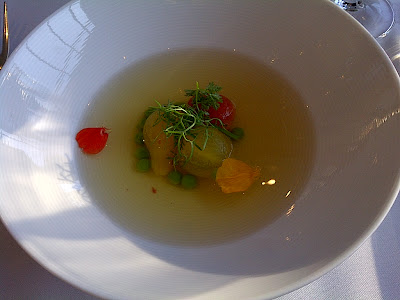 Chef Daniel Muia of Mogette restaurant presented  a very well executed and flavourful pickerel quenelle with crayfish tails, crayfish beurre blanc and a micro green watercress salad. This was one of my favourite dishes. 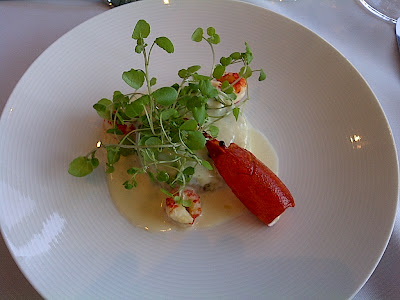 Chef Scott Vivian presented his own version of fried chicken with succotash, boiled peanut and sage. This was a very strange dish. The flavours were right, the panko crust was good, but,  the roasted chicken breast used for the filling was not whole. It was ground in such a way that the "fried chicken" result was too reminiscent of a tv dinner of my youth. Although the crisp coating for the chicken was enticing, chewing this item was not. 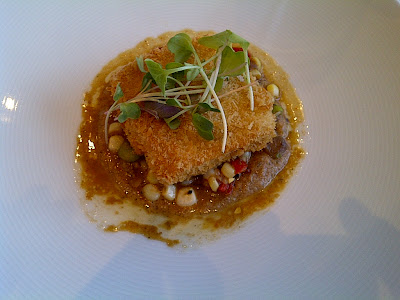 Chef Mark Cutrara likes to take delivery of a whole beast and he presented slices of venison roast and braised venison with a very good classic potato gratin and a ramp puree. 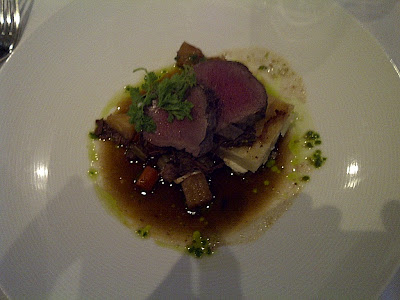 Pastry chef Rachel Vivian presented raspberry curd tart with a scoop of vanilla frozen yogurt. I really enjoyed the taste of the tart yogurt and the raspberry curd, but for me, the chocolate elements were not a complimentary flavour to the yogurt and raspberry features, which I felt were very good on their own. 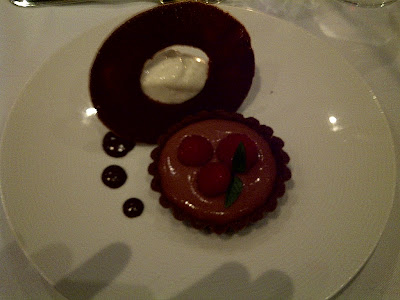 Posted by the cookbook store at 11:12 AM