Friday Lunch from The Chickery

Like other chefs around Toronto--and New York, David Adjey yes, that same guy of TV fame, has decided to go the fast food route.  Open just over a month, The Chickery serves, you guessed it, chicken with sides.  They are roasted and frying not just any old chicken.  This chicken is free range, antibiotic, steroid and hormone free Beretta Farms chicken. 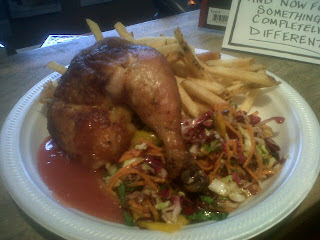 We sampled a roasted half chicken.  Nicely browned and spiced, this chicken had no nasty clots of fat as fast food chicken often has, nor was it too salty.  It was moist but not watery. 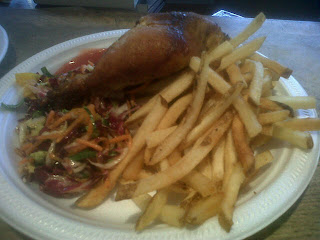 Our two sides were fries and coleslaw.  It was hard to judge the fries.  As usual, by the time they arrived at Yorkville and Yonge, the fries had lost the crispness with which they(we hope)had started. They were less golden than one wants to see in a fry.  One of us found them slightly salty. Nothing to complain about with the coleslaw.  It was one of the most colorful we have ever seen with red cabbage, thin ribbons of yellow pepper, orange carrot shreds, green onions, and , we believe, a little fennel, under a shower of black sesame seeds. Its vinaigrette was more sweet than acidic.  The real standout was a homemade plum dipping sauce.  A beautiful shade of pink, it was both smooth and spicy, a revelation for anyone who has only tasted the thing called plum sauce served up in plastic packets. 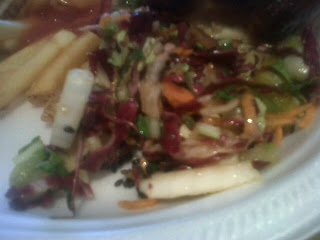 At just under $20/00 for two, this was a meal which satisfied both our hunger and our pocketbooks. 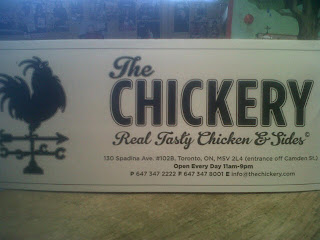