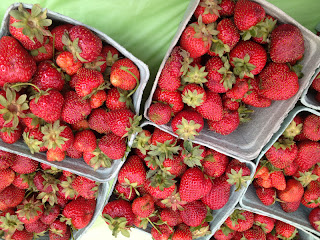 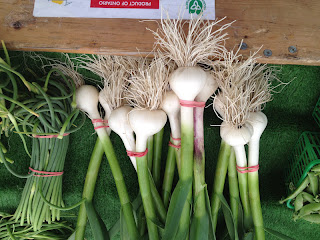 Both Bosco and O.K. Farms had new garlic so dense and perfect that it appeared not quite real as garlic often does early in the season. There were also mounds of twisty, twirly garlic scapes.  Great news for those of us eager to try the garlic-scape pesto in Ian Knauer's The Farm. 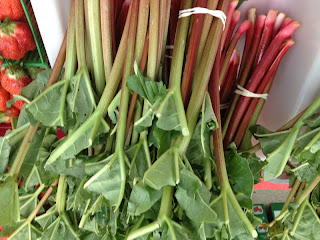 Thames Valley Melons had the prettiest rhubarb, thin stalks of a deep ruby red.  Although it is barely mid-June, there were potatoes available. One of their best products is their corn.  It was reassuring to find out it is not yet ready: that would be too strange. Good to find them at HSC since they have historically been further afield at Liberty Village, City and Metro Halls. 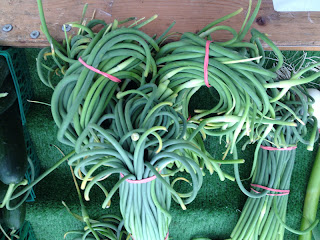 At this time of year, the Loffredos rely on their prepared foods as merchandise since the stoned fruits which are the mainstays of their operation are not yet ready.  Although their crops will be reduced, the good news is that there will be some peaches and cherries.
Posted by the cookbook store at 6:59 AM