I’ve always thought that Mother’s Day gifts should be endearing and somewhat useless (well, mine to my mother always were) so these measuring cups from Abbott caught my eye. Prettily pink with charming scalloped edges, their cute quotient is undeniable. Alas, those frilly rims preclude using them for baking because the dip-and-sweep method of measuring dry ingredients just won’t work. 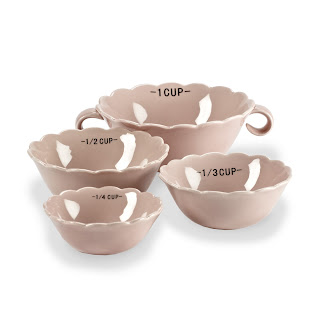 However, fill them to the marked line with anything else and they’re perfectly accurate, and will add a touch of whimsy to your (or your mom’s) batterie de cuisine. ($17.99/set of four; visit http://hosted.where2getit.com/abbott/ for retailers.)

Gluten seems to be public enemy number one these days. Celiac disease aside, I don’t get the antipathy, but gluten-free appears to have become the new grail. Many gluten-free baked goods are as dry and heavy as Proust (madeleines notwithstanding) but you can’t say that for the new line of gluten-free goodies from Toronto’s own Dufflet Rosenberg. Launched earlier this year, the range includes a chocolate-dipped coconut macaroon and a chocolate-chunk brownie, but my faves are Dufflet’s gluten-free carrot and chocolate Cakelets.
The carrot cake, rich and moist from coconut and with a nice hit of spice, has a fluffy cream-cheese icing, while the chocolate would satisfy the fussiest chocoholic with its layers of devil’s food chocolate cake, chocolate buttercream and shiny glaze. Each 5 ½- x 3 ½-inch (13 x 9 cm) cake cuts into about eight slices so they’re just the ticket for a Mother’s Day afternoon tea. ($16.99 each; Dufflet retail stores—www.dufflet.com/html/retail—Longo’s, Fiesta Farms or Summerhill Market.) 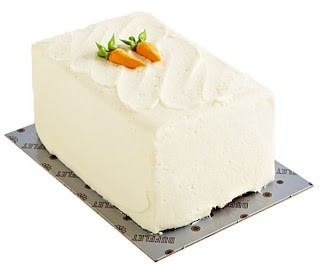 I’m not big on “gadgety” cutting boards—let’s call them boards with benefits—preferring my plain, utilitarian versions. But, Trudeau’s Chop ’n’ Clear Cutting Board is making me rethink my stance. Rubber feet mean the polypropylene board doesn’t slip (no more need for a damp tea towel!) and the two nifty slide-out trays let you sweep any trimmings into one and your chopped ingredients into the other, ready for adding to the pot. A channel round the edge directs any liquids into the drawers. Neat. ($24.99; visit www.trudeaucorp.com for retailers.)

Julia Aitken is a Canadian freelance food writer and editor who contributes to The Cookbook Store blog with her insightful column Test Drive on what's new for the kitchen. Julia can be found at http://julia.aitken.com

Posted by the cookbook store at 2:29 PM