BOOK REVIEW: Coi: the stories and recipes by Daniel Patterson 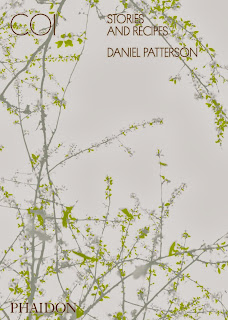 NOTE: We will be hosting Daniel Patterson Tuesday October 15th with Chef Alex Atala of D.O.M. in Sao Paulo, Brazil. Tickets available from The Cookbook Store. www.cook-book.com
This is an off site event at George Ignatieff Theatre, 15 Devonshire Place.

In an age when it seems every restaurant and chef is producing a cookbook a couple of years after opening, it’s refreshing for a chef to take some time before providing us with a written account of his time as a chef and his life at the restaurant. It doesn’t hurt either that he’s an accomplished and published writer. Daniel Patterson opened Coi (rhymes with “foie”, which ironically is banned in California; the state where Coi is situated) in 2007 at a time where really high end fine dining was sparse on that side of the country. Manresa and The French Laundry were doing their thing and we can’t mention Californian restaurants without Alice Waters’ little place in Berkeley, but San Francisco itself was relatively quiet when it came to cuisine. Patterson is widely credited as catalyzing the movement towards what we understand today as “California cuisine”. Today San Francisco is regarded as one of the best food cities in the world; boasting names such as Benu, Saison, Quince and the young brilliance that is State Bird Provisions.
The Coi cookbook is publisher Phaidon's first to feature a North American restaurant. Notorious for producing cookbooks that are perhaps a little light on functionality, yet possessing maxed-out aesthetic, Phaidon stays the course in their latest addition to the coffee table market of chef cookbooks. The gorgeous photography that has come to be expected of restaurant cookbooks is present in full force within the stark white covers of the Coi cookbook. Photos resonate with stylistic nuances of the Noma cookbook; images of nature and abstract shots are as plentiful as those of the actual food.
Patterson defines his food as the result of his constant pursuit of delicious flavour. Lately it seems to be a trend to try to center a dish on the use of a new or interesting technique as opposed to building a dish around a flavour profile. By focusing on the deliciousness of his food, Patterson produces clean flavours that beautifully showcase the quality of the product he has access to in California. Yes, the “famous” Popcorn Grits recipe is included, preceded by an anecdote detailing its creation (each recipe comes with a personal explanation about its concept and history by Patterson).
A gripe I do have with this book is that the publishers have chosen to mirror the recipe format of the Noma cookbook and separate the book into two halves, photos and anecdotes in the front and recipes in the back. While this is admittedly a book few will cook from, the functionality of the book takes a big hit when the user needs to use two bookmarks and many page turns in order to attempt a recipe. While there is a fair amount of special (read: expensive) equipment needed to complete components to each recipe, there are many sub-recipes one can extract to use in other ways. While we aren’t likely to replicate a perfectly formed beet rose (a task that requires the focus of a legion of cooks at Coi and numerous hours), the recipe for Carrots Roasted in Coffee makes for a stellar side at a dinner party (especially since the carrots can all be done in batches and held in the warm grounds).
As the critic, I suppose it is my responsibility to provide a clear and concise review that answers the question of whether or not you should buy this book. The big question I’m sure many of you want to ask me is whether you should purchase Coi, or the other big California release this year, Manresa. Truthfully, it is difficult to make an argument against the Manresa cookbook; the restaurant’s been open for decades and has a treasure trove of winning recipes to share with the world. I will say, however, that while Manresa boasts solid technique and clean flavours, Patterson’s cuisine boasts a creative edge that yearns to push the heights of deliciousness.

Check out Josh's review of Coi the restaurant
Posted by the cookbook store at 5:53 PM