The Drake Hotel, Toronto, A Return.

The Drake is a very casual resto known for it's comfort food, when Anthony Rose was chef. Anthony has moved on and subsequently, Ted Corrado, formerly of the restaurant at the Royal Ontario Museum resto, is now the corporate executive chef for all of the Drake enterprises.

My first impression, before I even saw the food, and I arrived shortly after 6pm, was that the service was remarkably inattentive and quite disorganized, especially considering the fact the resto was half full and servers were all interacting together in the back of the room. The front of house manager who had originally escorted me to my seat, walked near me 3 times after I was seated and each time, after seeking her attention, I asked if she would take my order as no servers had come by and she advised me that she would have a server come over. It did not happen! Once the food started coming, it came quickly, but, I was seated for 35 minutes in a half empty resto before the first dish arrived and this was not fancy cuisine. 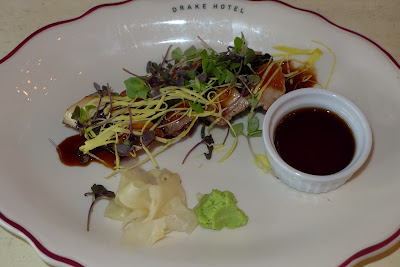 BBq pork belly nigiri (with red rice, as requested) with basil sprouts, egg and teriyaki sauce, was a tasty starter, but, basil leaves would have improved the overall flavour experience. 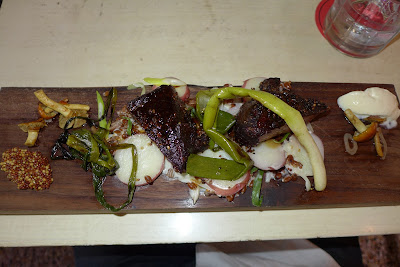 My favourite dish, 3 day slow cooked short rib with charred green onion, sliced red potatoes, creme fraische, thinly sliced green beans and farro. The beef was very tender but the texture was excellent as the beef held together and did not fall apart. The beef had a wonderful bbq kind of flavour with a strong over tone of clove which turned out to be a highly compatible flavour. I would come back for this dish anytime. 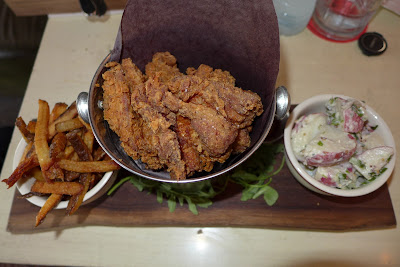 Fried chicken which was not crispy and the skin somewhat oily. Despite all of this, the meat was moist and the flavour experience rather pleasing. The chicken was accompanied by "smoked potatoes" which lacked any apparent smokey flavour and terrific french fries which I ordered as a side, crispy, tasty and perfectly cooked.
Posted by the cookbook store at 11:11 PM