America Restaurant in the Trump Hotel

America restaurant is a partnership of Charles Kabouth's Ink Entertainment and Oliver and Bonacini Restaurant Group. The chef de cuisine is Bill Osborne. Thursday, Friday and Saturdays from 11pm on, America turns into a stylish supper club. We were here to eat. 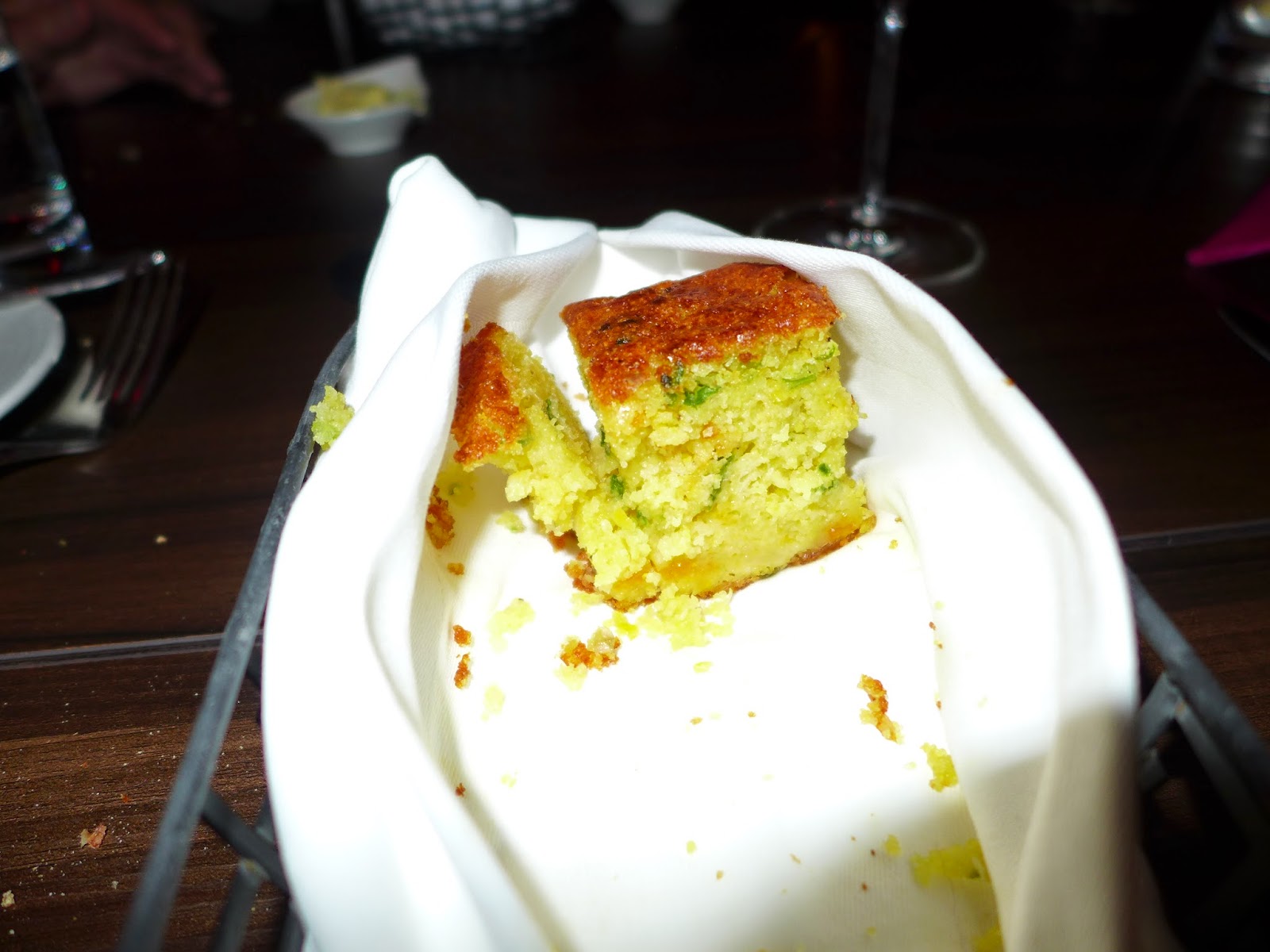 Very tasty corn bread that was very quickly devoured before a photo was shot. 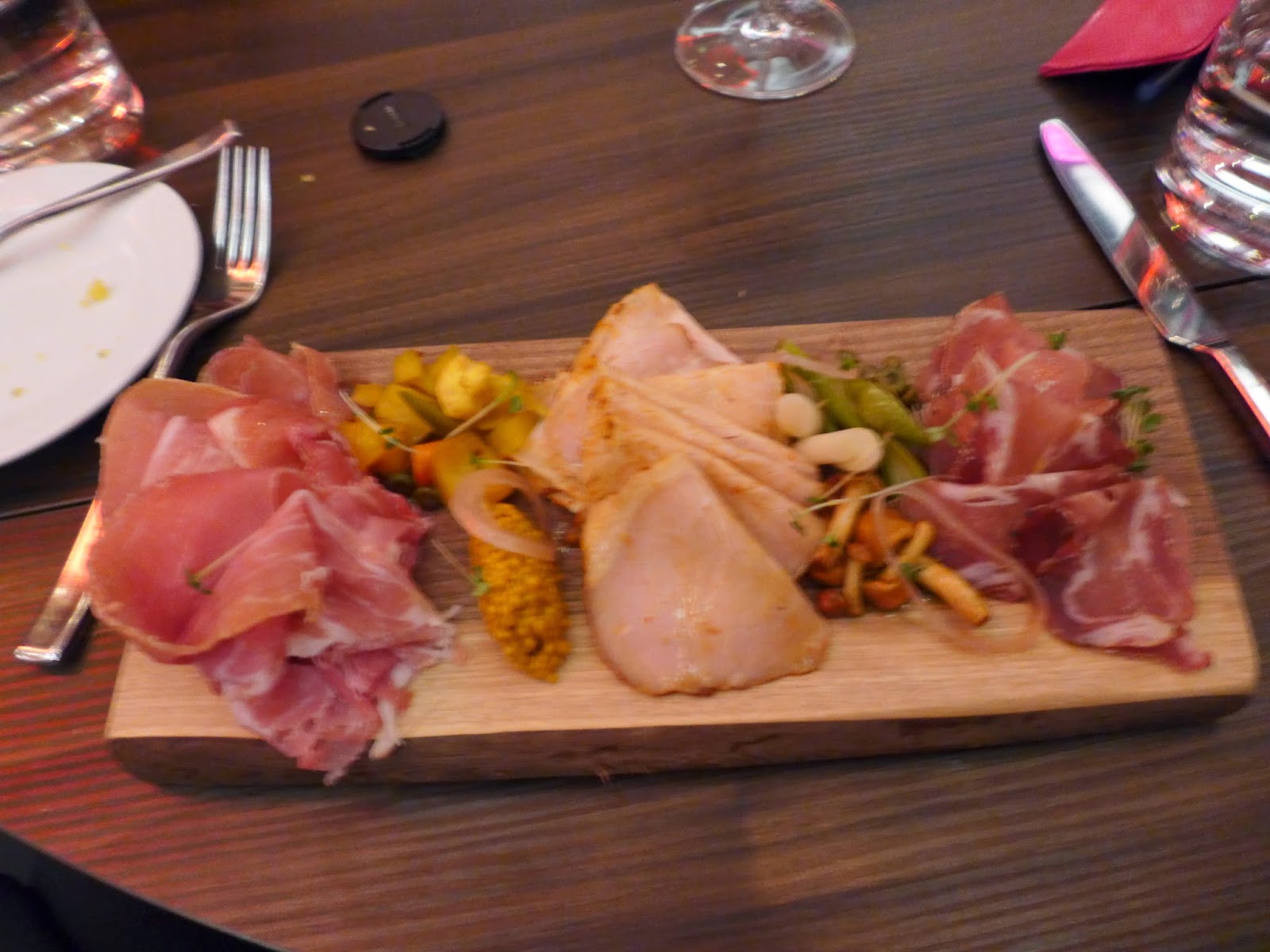 "Ham and pickles": inspired hams, house creole mustards, chow chow pickles all accompanied by grilled sourdough bread (no photo). The various hams and pickles were really good. One could make a meal of this dish alone. 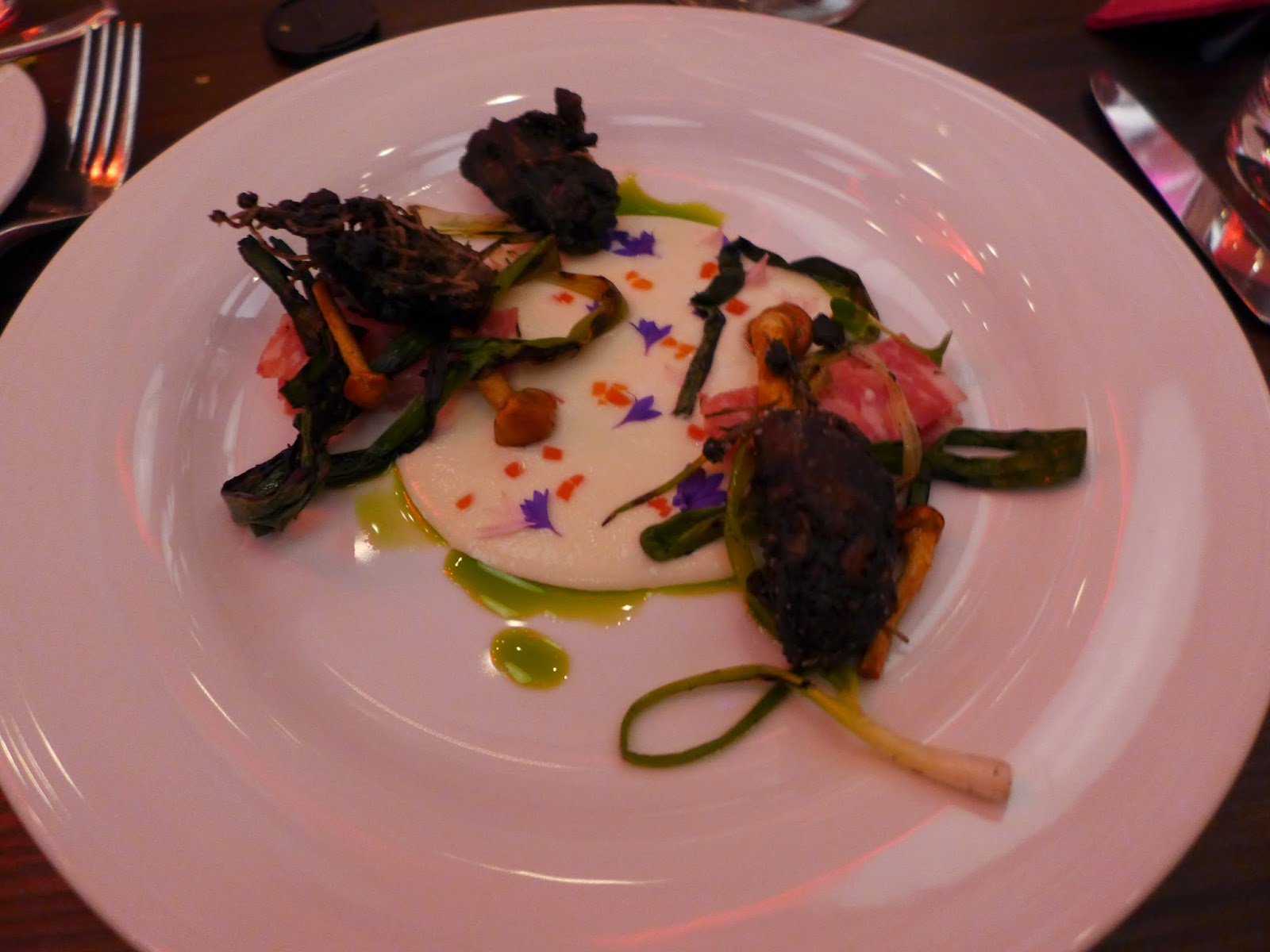 "Crystal" fried western oysters, nameko mushrooms, kohlrabi, apple and saucisson. Really enjoyed the oysters which had a crispy outer shell but were perfectly undercooked and just warm, inside. Quite the feat of cooking. 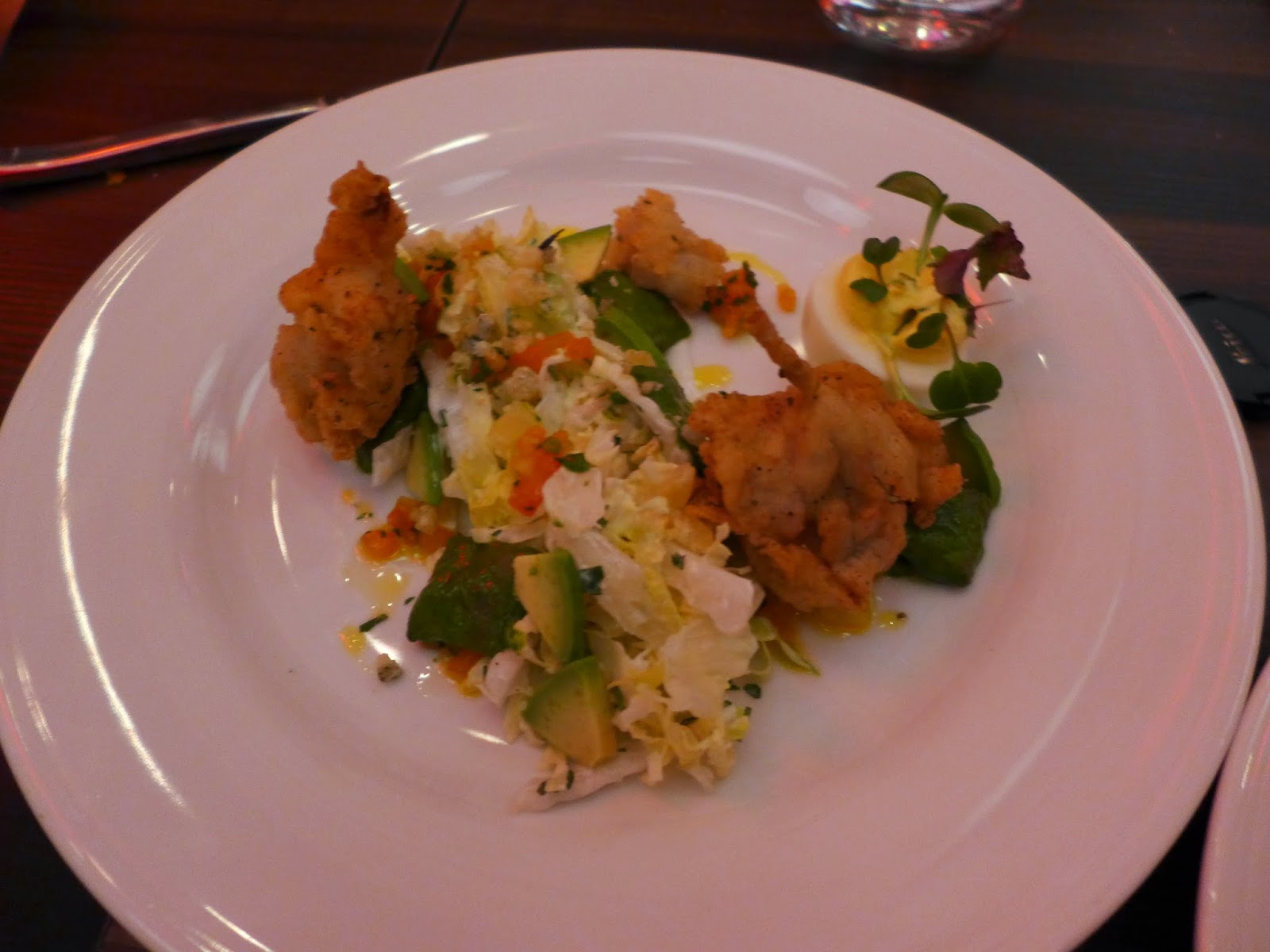 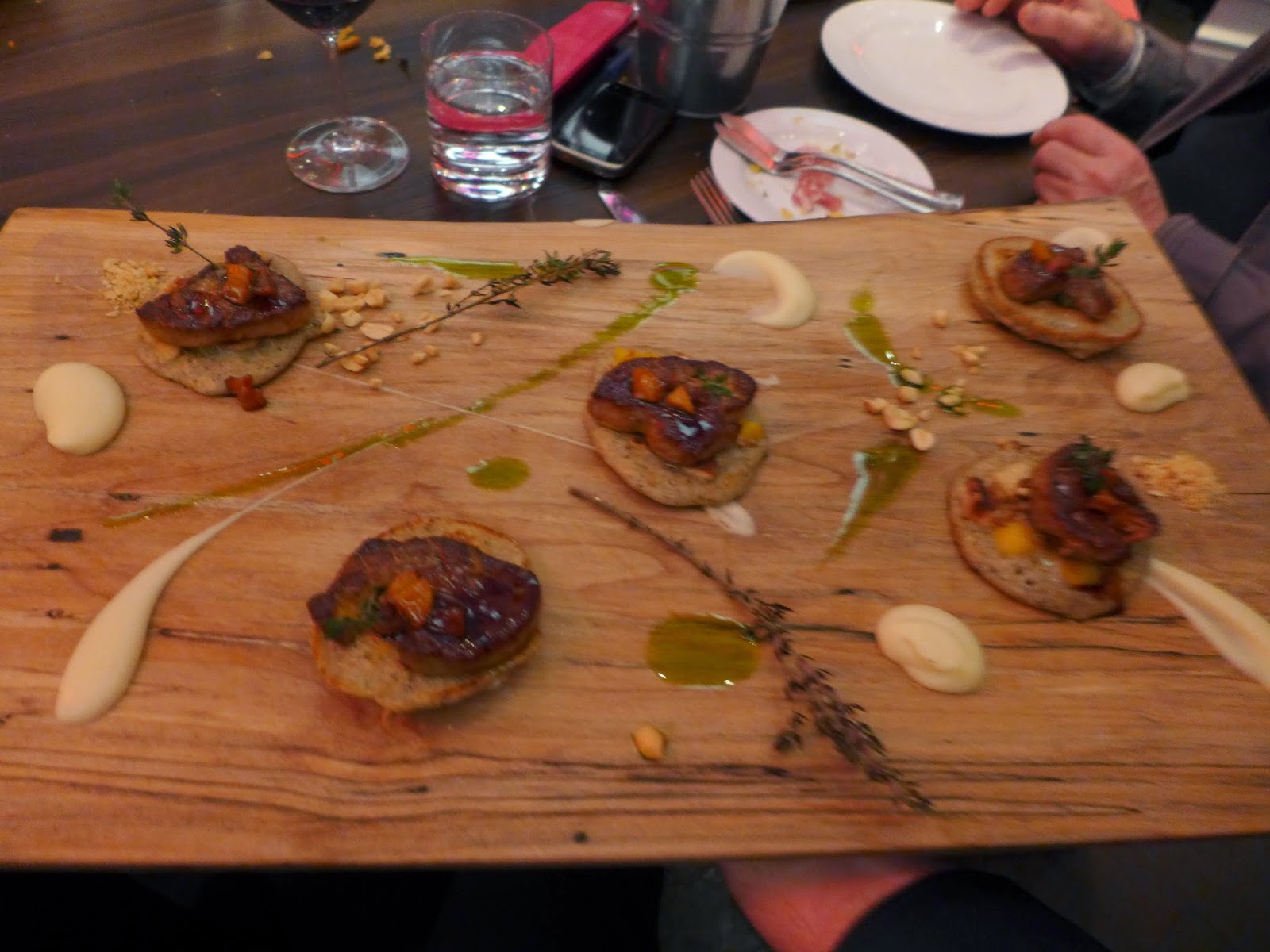 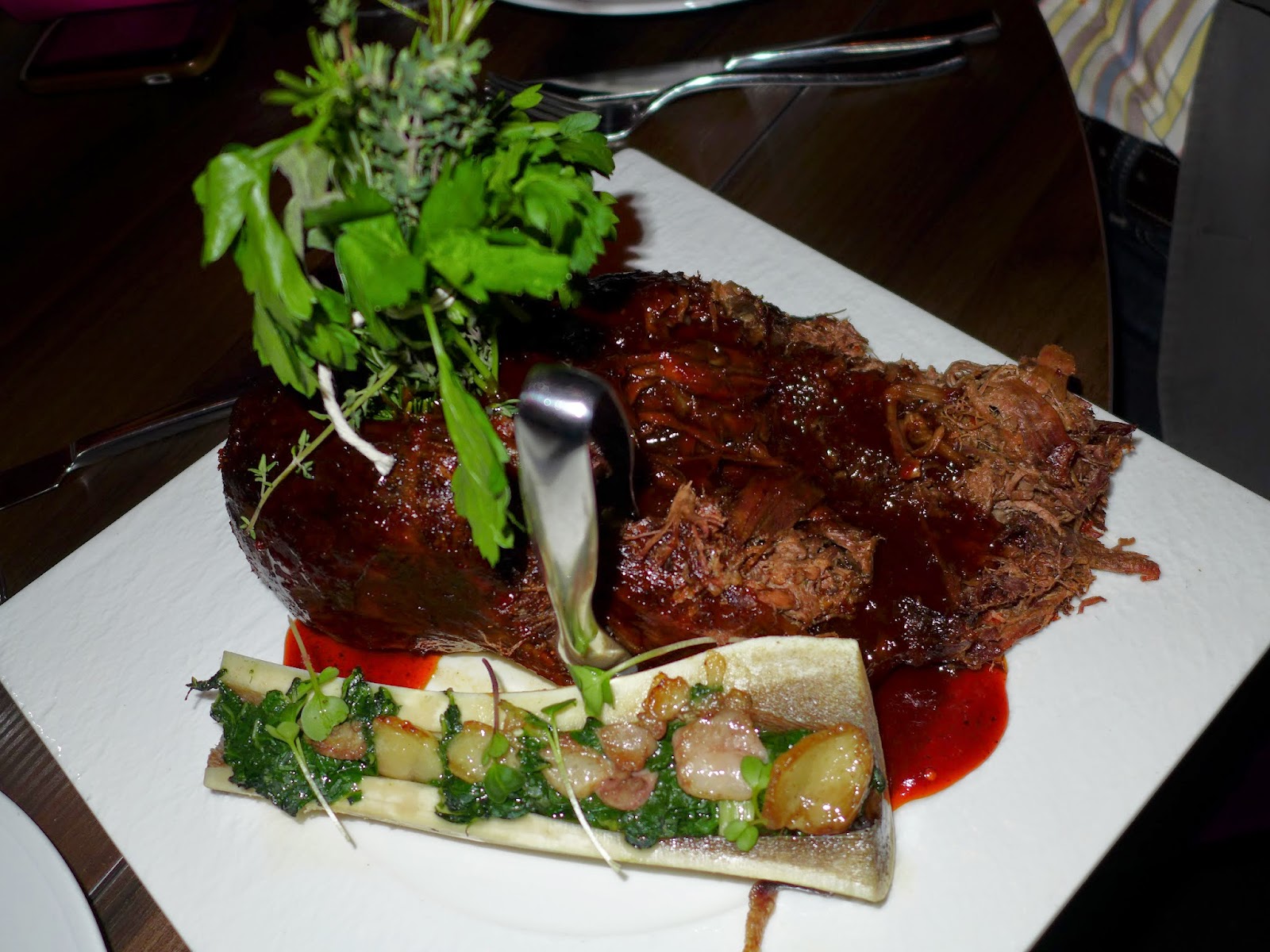 This is actually the dish that drew us to the restaurant, Beef shin BBQ, a dish that is normally 10 pounds and supposedly serves 4-6 people. Well, we called in advance and ordered a "half Portion" and 5 people had trouble doing justice to this terrifically executed dish. The beef was accompanied by a marrow bone in which the bone marrow was scooped out in small, easily edible slices. The beef was sauced with "Billy Bob's birch BBQ sauce". 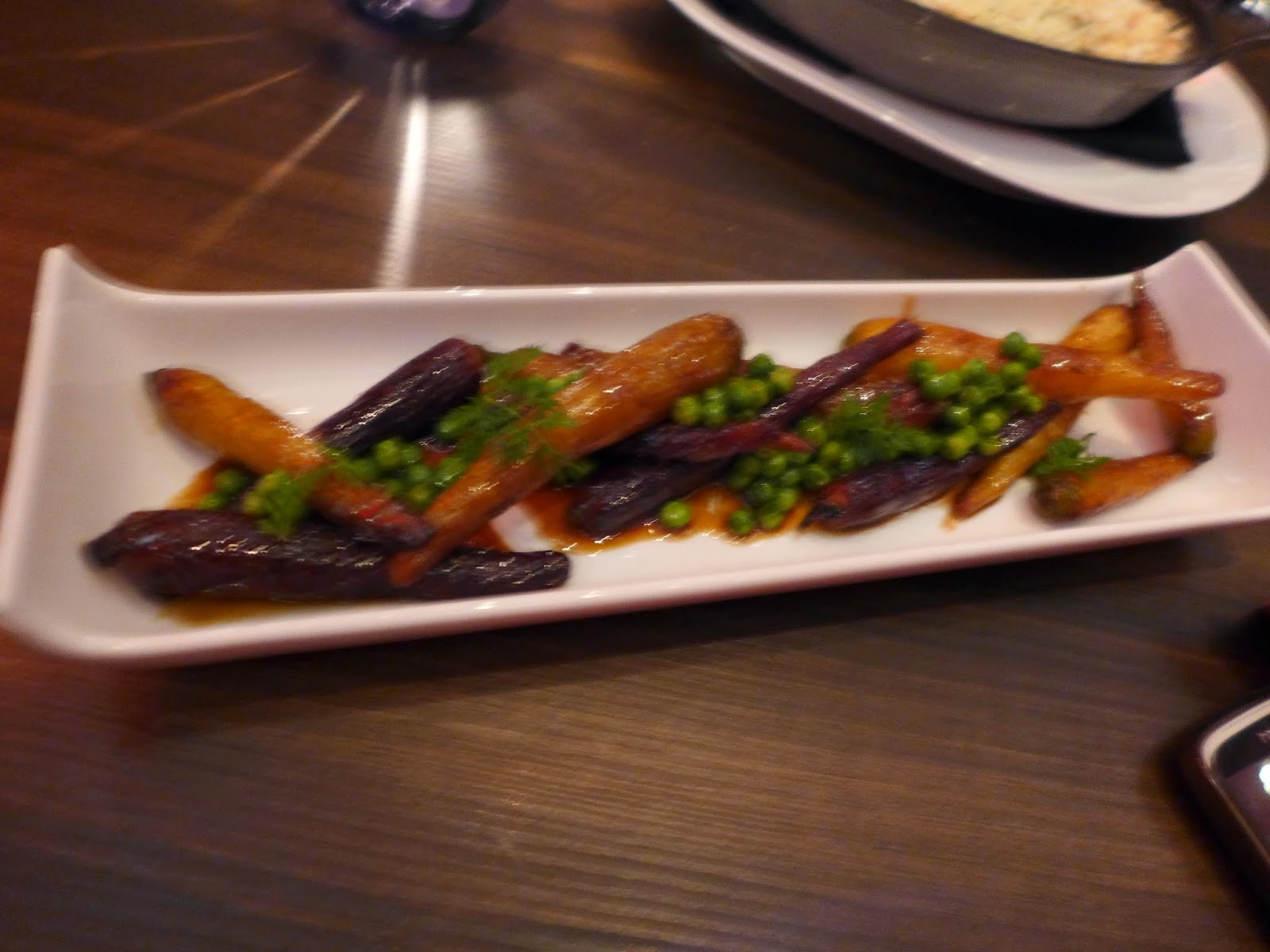 Glazed heirloom carrots and peas that accompanied the beef dish. 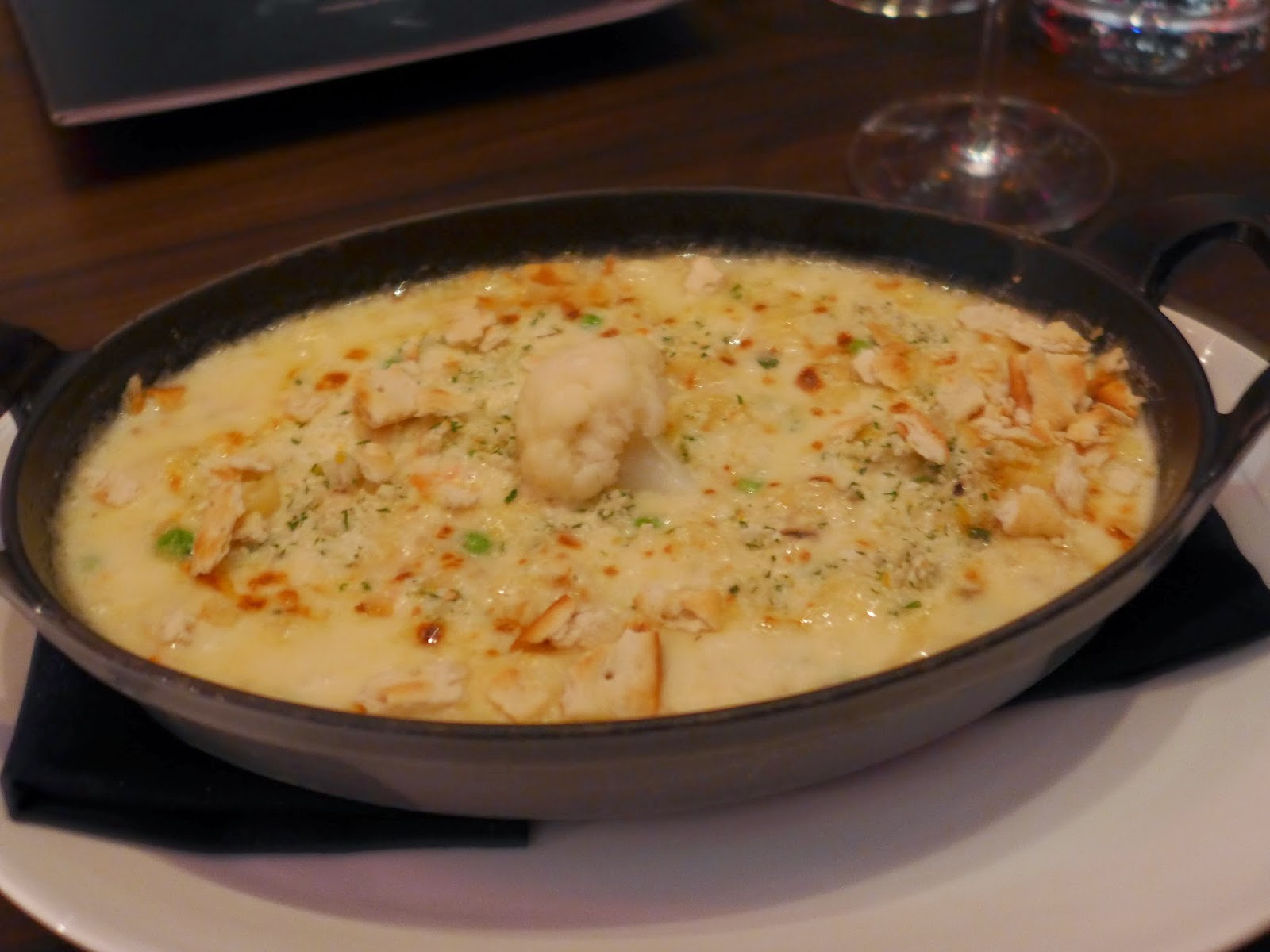 "Trumped" macaroni and cheese that also accompanied the beef dish. One of our group, a rather well known former restauranteur, practically devoured this dish meant for 5. 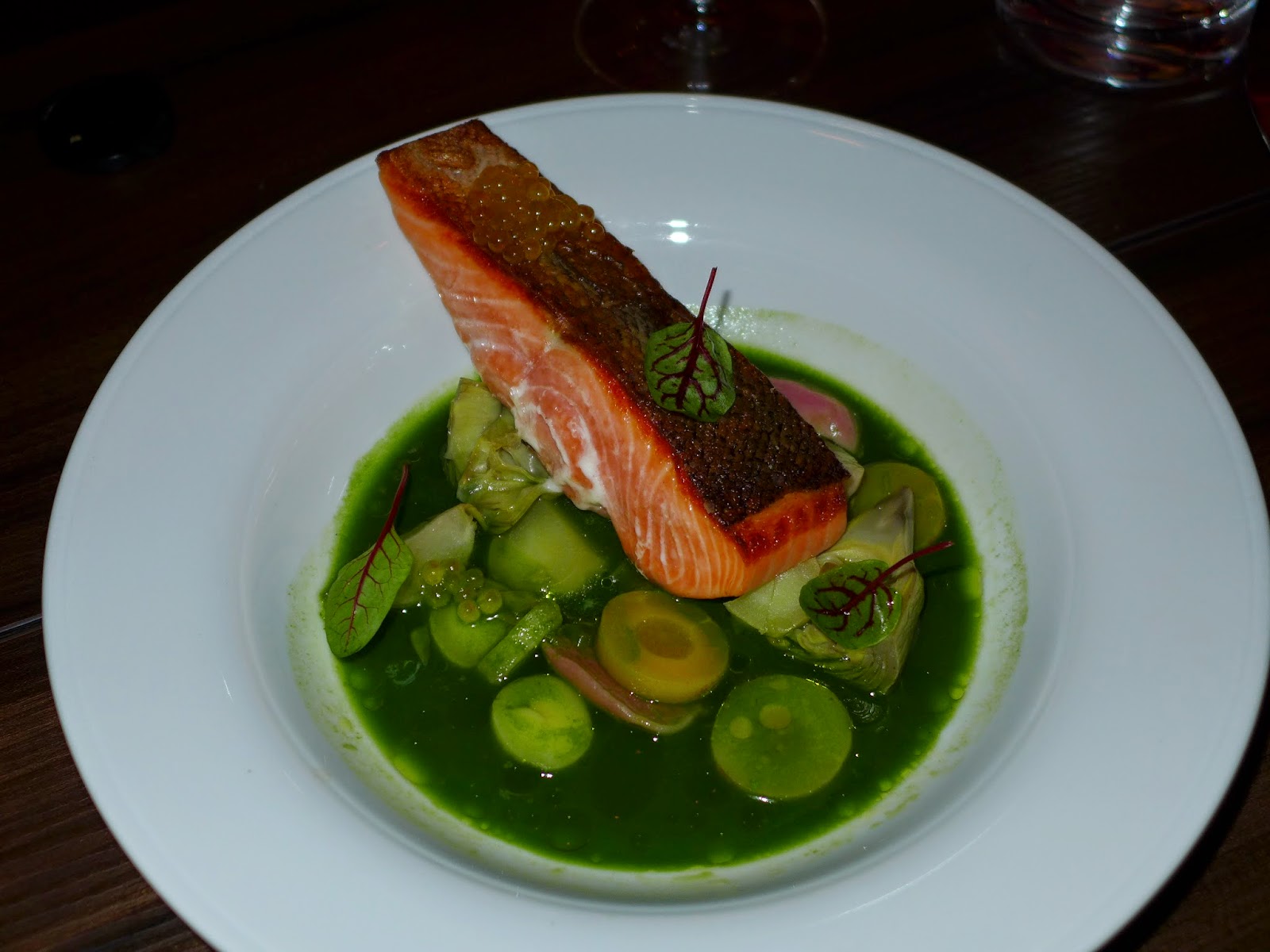 The only failure of the night, slow cooked chinook salmon (the very best tasting of all the salmon species). The salmon was overcooked and rather dry. The salmon was accompanied by artichokes, potato, smoked roe and parsley broth. The ingredient concept was very good and if the salmon was properly cooked, this would have been a very enjoyable dish. 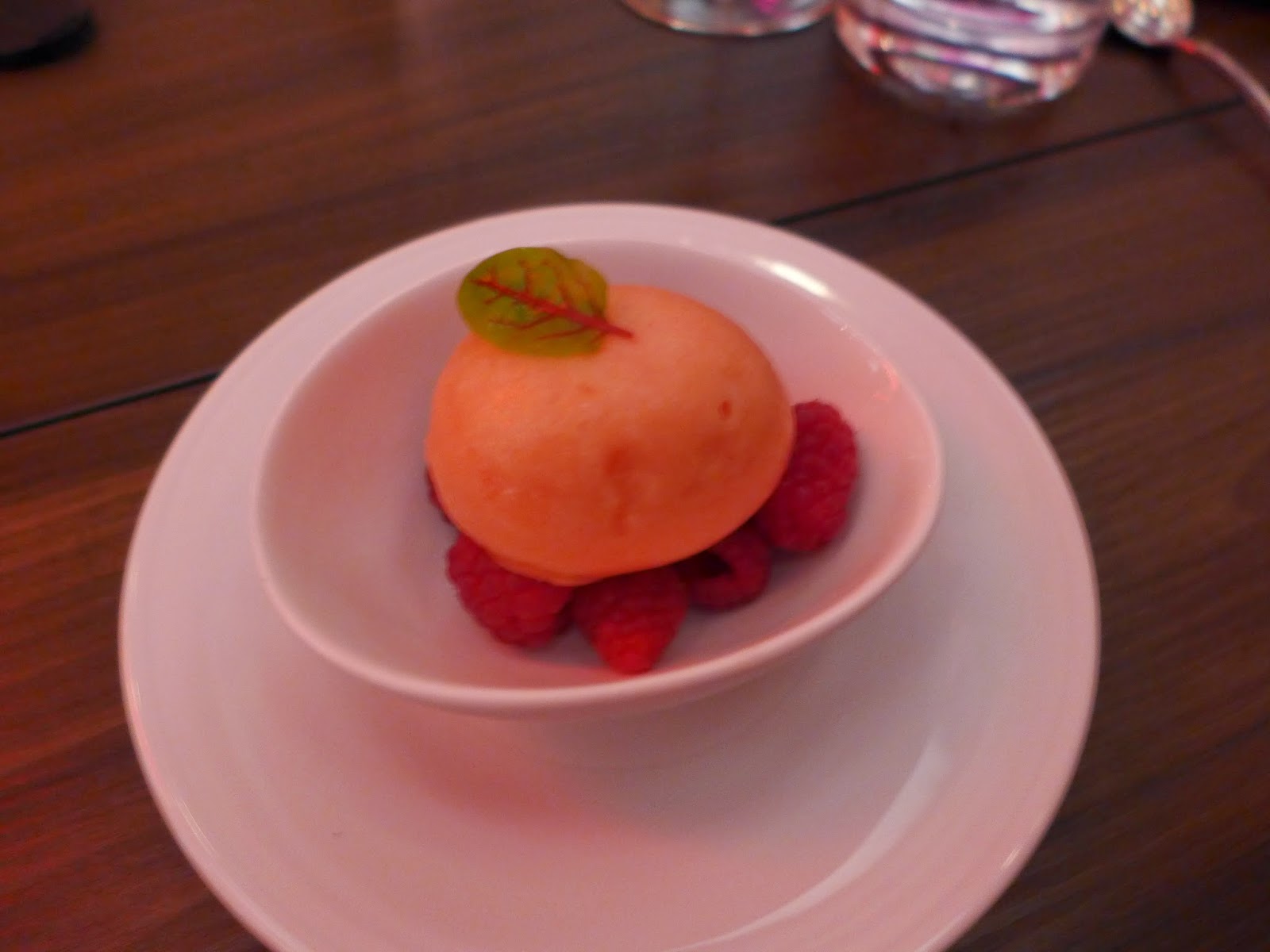 Blood orange sorbet was truly underwhelming, almost tasting ersatz.
Posted by the cookbook store at 12:41 AM