Co-owners and chefs Jonathan Lucas and Jay Moore have partnered in creating this Texas style BBq. Oak wood is used for smoking. Simple salt and pepper for seasoning. They had 2 smokers custom made for them. Beauties! This BBQ joint should be at the top of anyone's list for bbq. 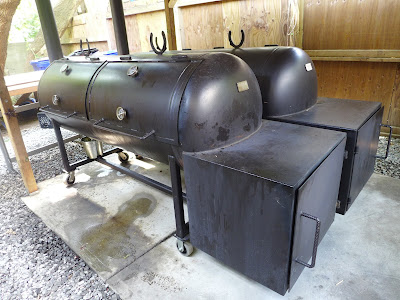 NOTE: go early or they run out of items! 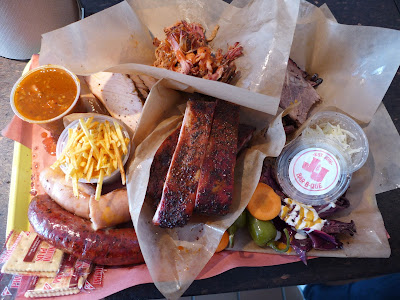 The turkey had very good smoke, very nice texture and flavour but was too salty.

The cole slaw was very good  and a good palate cleanser and fortunately, not creamy. The fries were very thin and very crispy. I think if the fries were thicker, they would provide  better potato experience. The 12 hour smoked cabbage was remarkably tasty and had a very good smokey flavour.

The brisket and beans were very good, with very nice smokey flavour and a lot of very pleasing sauce.

There were 2 sausages for my friend and me to try. One was macaroni and cheese (not for me) and the "guts" sausage (which we both enjoyed). The guts sausage had a very pleasing fine grind but still had terrific texture. The sausage was perfectly smokey and well spiced, giving a moderate burn on the finish. 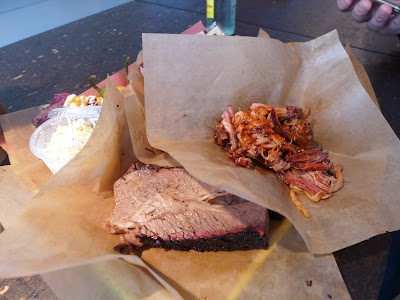 The perspective of the brisket and pulled pork. The strong flavours of the vinegar and pepper were not balanced with enough smokey flavour so the pepper/vinegar combination overwhelmed the flavour of the pulled pork.

The brisket, shown above, was quite juicy with very good texture and perfectly seasoned with pepper, giving the bark and mild burn at the finish. Impressed. 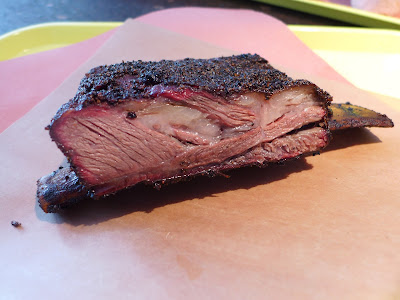 The exceptional beef rib! Plenty of good smoke, juicy, very good texture, very nice mild burn at the finish from the judicious use of pepper. Note, beef ribs are not on the wall menu, so ask to see if they have any. The only place I have enjoyed better beef ribs was at Terry Black's in Austin, Texas. And, they were not that much better.

The house made J and J BBQ sauce is the best BBQ sauce I have enjoyed in Ontario.

The corn bread (NO PHOTO), was the only disappointment. Too oily (fat from the brisket was used). I was not pleased with the flavour or texture, which I prefer lighter. The corn bread needs reflection, in my opinion.
Posted by the cookbook store at 2:13 PM