In 1998, Andoni Luis Aduriz stands in an empty Mugaritz. Named after the oak tree that dominates the property flora, Aduriz’s restaurant waits empty save for lofty dreams and failed expectations. The saying goes that “idle hands are the devil’s tools” and Mugaritz sure had a wealth of those. With nothing else to do and no patrons to cook for, Chef Aduriz put those idle hands to work surveying the restaurant’s surroundings for new, indigenous ingredients in hopes of sparking inspiration, and eventually, a full dining room. It was at that moment that Mugaritz took its first step down the path that would lead it to a pair of Michelin stars and a podium finish at the San Pellegrino Top 50 awards. More internally, it catalyzed the formation of Aduriz’s self-titled “techno-emotional” style of cooking.
Fast forward over a decade and Mugaritz stands atop global top restaurant rankings and draws global applications from cooks abroad to come and work for free. What started out as an innocent excursion into the Basque countryside propelled Mugaritz to an internationally acclaimed profile and admiration from chefs and patrons alike. Needless to say, the hype and anticipation leading up to the inevitable release of a cookbook was palpable. Finally, Mugaritz: A Natural Science of Cooking has been released upon the world, and it could not be more impressive.
Years ago a chef by the name of Heston Blumenthal released his first cookbook revolving around the recipes and philosophy of his restaurant “The Fat Duck” in Bray, England. It was, and remains, one of the best restaurants on the planet. While the recipes and photography in that book were no doubt gorgeous and engaging, critics agreed that the literature accompaniments really fleshed out the quality of the book. Blumenthal included essays and research papers about everything from sous-vide cooking to his opinions on the facets of classic cookery. In that similar vein, Andoni Aduriz has fleshed out many of the concepts in his book with notes and papers about numerous topics ranging from the basis of inspiration and creativity to the perfect technique for cooking foie gras. Graphics are generated to convey the ideal times of year to harvest seasonal ingredients. It seems to be a growing, and fortunate, trend that professional cookbooks are to be more than just recipes and photographs. Chefs are more and more inclined to share their opinions, thoughts and curiosities with readers and it truly enhances the experience and immersion of the reader.
Abandoning the cookbook standard of close-up photographs from carefully selected angles and properly placed lighting, Aduriz chose to have his photos scaled 1:1 life size and have the dishes presented on white canvas. Should a bowl be the suggested serving vessel, a depression is made in the canvas to serve that purpose. Such minimalism highlights the intricacies and brilliant colors on each “plate”. Unlike the Noma cookbook, which is also published by Phaidon, the Mugaritz cookbook favours a traditional layout with recipes and accompanying photographs grouped together, as opposed to the messy and disorienting tornado that was Noma’s recipe catalogue.
While the recipes themselves may not be perfectly transferable from Mugaritz to the professional kitchen (not to mention the home kitchen, which usually isn’t equipped with immersion circulators, thermomix blenders and liquid nitrogen) due to scarcity of ingredients indigenous to Spain, concepts and ideas are easily replicated and recipes are quite simple on the ingredient front, though heavy on technique. Let’s face it; you’re unlikely to be making clay-coated potatoes or fossilized salsify any time soon. However, who’s to say you can’t read the little essay that accompanies the “fossilizing” technique that describes the effect calcium oxide has on fruits and vegetables, and then apply that knowledge to another concept?
To its own end, the Mugaritz cookbook is not a how-to book; you are not likely to replicate the dishes seen within its pages. However, where the true value of these so-called “coffee table cookbooks” lies is with their ability to inspire creativity and original thought. Andoni Aduriz is unanimously a polarizing representation of forward movement in cuisine; he was voted “Top Restaurant, Chef’s Choice” at the 2012 San Pellegrino Top 50 Awards. Through Mugaritz: A Natural Science of Cooking, one is exposed to the philosophies and opinions of Andoni Luis Aduriz in a way that catalyzes new ideas and a hunger to learn more. 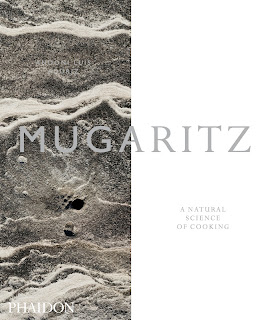