Borden Street Market is beginning this season much as it ended last season: in a downpour. At least it wasn't too chilly.  There were lost of red crops to brighten the day with strawberries, beets, and radishes,red lettuce, even some tomatoes. 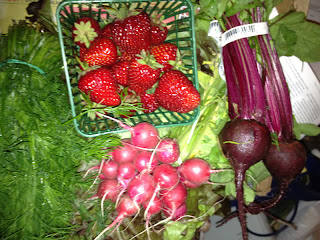 There are changes at Borden Street this year.  Marvellous Edibles, Bosco Farms, and Monforte Dairy are gone.  Fortunately, all of them will be at other markets. Several  vendors have arrived to take their places.  Danbrie Farms has maple products and cured meats. New to the market and to farming, Stephen Laing of Fiddlehead Farms currently is selling radishes and lettuce but will have a CSA(community supported agriculture)box available from the end of Jnne until the end of October. In the space formerly occupied by Marvellous Edibles, Bio-Visions Farm has grass fed beef from its herd of Highland  cattle.  LPK's Culinary Groove is offering desserts which are both gluten-free and vegan.

Not everything has changed.  The effervescent Caroll Collins is back and already has beets grown from seed planted in March. VanHarts who have greenhouses and outdoor acreage have their usual rainbow of tomatoes. Sun-Ray Orchards is back for their third year with strawberries, lovely tiny radishes, and lettuce plus some decidedly non-vegan baked goods. O.K. Farms which left early last year due to staffing problems is back.  While we always look forward to their later crops of elderberries and some less common varieties of apples, we were also happy to spot garlic scapes this week.
Posted by the cookbook store at 5:30 PM