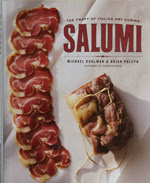 It seems like the world of food is undergoing a renaissance as it reflects back through the annals of history to find new pleasures. Home cooks are embracing larger projects like sourdough breads, pickling produce grown in their backyards and regular stock production. Perhaps most telling of our devotion and interest in the past is our relatively recent fascination with cured meats and charcuterie. Dinner party attendees are just as likely to discuss the virtues of a particularly impressive jamon iberico as they are the latest vintage of Chateau Margeaux. There’s something magical about taking the less-desirables of an animal and transforming them, through technique, finesse and skill, into something delicious. Charcuterie is the epitome of the term “greater than the sum of its parts”.
I caught the salty-pig-part fever too; a few years back I was buying up bellies, jowls and back fat and jerry-rigging my parents’ basement cellar to provide that key balance of humidity and temperature that make charcuterie possible. The catalyst for my sudden involvement in the funky madness of pork preservation? A book written by Michael Ruhlman and Brian Polcyn by the name of “Charcuterie”. In an effort to bring old-world technique  into the home kitchen, they penned an excellent beginner’s guide to terrines, torchon, saucisson and more. While Italian salumi were given a modest amount of attention in their first book, it’s easily apparent that they chose to focus more on the French side of charcuterie. Perhaps as an acknowledgement of unfinished business, Ruhlman and Polcyn have returned to pay proper homage to Italy’s traditions of cured meats.
Built upon the same structure and framework as the first book, Ruhlman and Polcyn detail the background histories of what they refer to as the “Big 8” of Italian cured meats. What they’ve done is make the wildly diverse and often intimidating world of salumi more accessible to the novice by breaking it into 8 subcategories based upon the 8 most common parts of the pig used and their most common methods of preservation.
A welcome improvement over their previous book is the inclusion of colour photography along with the usual hand-illustrated drawings that accompany step-by-step instructions to crucial techniques such as removing pig skin from lardo and even breaking down an entire pig (the purchase of the whole beast is encouraged often throughout this book and the authors have even included a cost breakdown that demonstrates the economic intelligence of such a decision). Recipes are presented with gram-measurement accompaniment and the use of a scale is encouraged due to the slight but serious dangers of improperly prepared salumi.
In addition to the classic recipes used to prepare the so-called “Big 8”, Ruhlman also includes recipes for the necessary accoutrements such as pickles, crostini and pickled mustard seeds; the idea being that upon finishing the book you should be fully capable of preparing an impressive and complete spread. For those who don’t own a Collonesisan marble casket, Ruhlman includes a simplified recipe that omits the use of heavy slabs of stone.
While salumi still remains a waiting man’s game (and nothing Michael Ruhlman or Brian Polcyn can write is going to change that), it becomes vastly more accessible and less intimidating when presented in the way that it is here. Ruhlman and Polcyn are doing a great thing here in encouraging enthusiastic and ambitious cooks to embrace what used to be a method of making sure that an animal killed on Monday is still safe to eat on Sunday and is now simply a way of investing effort and time into making something delicious. Take it from a guy who’s already done it; nothing is as satisfying as taking that first cut into a perfectly-cared for hunk of pancetta. The way the flesh glistens as the air is perfumed with notes of rosemary and black pepper is hypnotic in its beauty. When the first slice lands on your tongue and the velveteen fat conjures at once sensations of rich spice and smooth sweetness in an effortless sigh, you’ll know your efforts to be validated, and then some.
There’s a reason, after all, why the good, old stuff never ever goes away.
This review is by Kevin Jeung.

Posted by the cookbook store at 2:37 PM