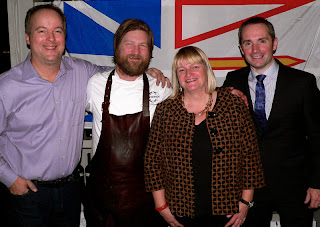 Saturday November 3rd, was the second dinner in Stratus Winery's ambitious Coast2Coast series celebrating Canada's great chefs and their restaurants, which of course also serve Stratus wines. The first event was in early summer with Vikram Vij from Vancouver, and what a memorable night that was, how on earth could Stratus top that, especially as harvest was in full swing in early November. Well apparently all you need to do is put a call in to the two Jeremy's, co-owners of Raymonds, in none other than Newfoundland and you are guaranteed an amazing meal and classic Newfoundland hospitality.

Chef Jeremy was animated in describing his involvement with his friends in hunting and foraging, although he let slip he didn't have his hunting license yet, but  he quickly said he was working on it!  And sommelier Jeremy had us equally enthralled describing how the availability of European wines in Newfoundland was quite astonishing compared to rest of Canada. That said he does have a soft spot for Stratus wines as they pair so well with the game and also the seafood they serve on the menu at Raymonds. Both Jeremys had been foraging in Newfoundland the very morning of their departure to Ontario so the meal was truly of the moment and most remarkable in light of their travel as they were in NYC cooking at the James Beard House all the while trying to dodge Hurricane Sandy!

Winemaker J-L Groux and Jeremy out did themselves with the wine selections paired with the meal. I still think any of the moose dishes were my favourites, but the cod sound was truly unique and did I forget to say dessert was sublime a perfect light ending to the meal.

Charles Baker and his team at Stratus have hit upon a winning combination for their Coast2Coast series and one can only wonder at what chef pairings they will dream up for next year. Don't miss them, they are engaging, unique and educational all rolled into one evening. Posted by the cookbook store at 2:24 PM