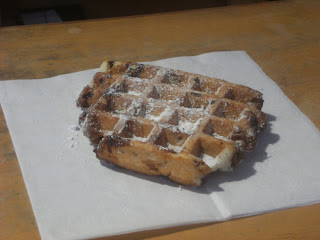 Once in a while--well maybe more often than that-- we like to treat
ourselves at lunch on Friday. Our latest lunch was from Wanda’s
Belgian Waffles--(not related to Wanda’s Pie in the Sky as far as we
can tell) which recently opened in the neighbourhood. 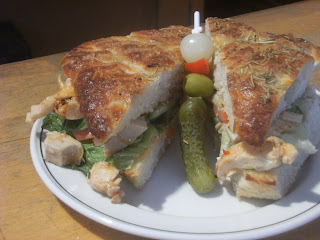 Besides the waffles, there are pressed sandwiches. We tried the “famous” roasted chicken breast with Thai sauce. Though the bread was nicely golden, this sandwich wasn't pressed enough to hold the filling which fell out as soon as it was picked up. The Thai sauce was sweetly bland. The only discernible flavour came from a cornichon, part of a quaint garnish, impaled along with an olive and pickled onion on a cocktail pick. 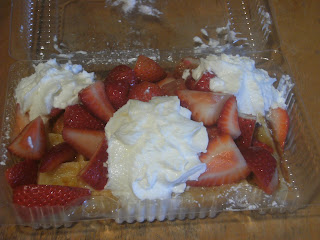 We also sampled a waffle with whipped cream, strawberries, and maple topping. Other than under-ripe berries it was acceptable. Ditto the Liege-style cinnamon waffle. They would probably be best eaten immediately on-site, rather than carted back to the store as we had them. Lavender-flavoured soda had almost no taste but the Spa & Fruit sparkling water was similar, if a bit sweeter than Orangina.

Posted by the cookbook store at 1:31 PM