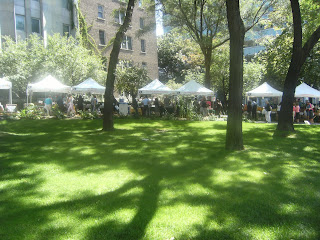 What a very strange summer!  Not only are there fall fruits at the market--pears, plums, and apples-- rhubarb, that most quintessential of early spring crops, has reappeared. 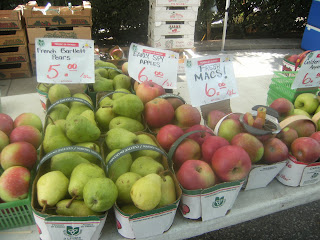 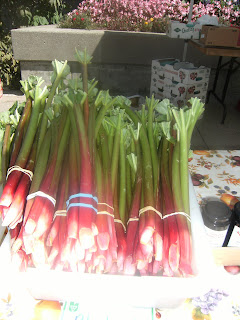 I, of course, cannot resist rhubarb.  This will give me an opportunity to cook up a batch of Ottolenghi's rhubarb and plum relish, using Italian rather than the suggeted red plums.

I had feared that peach season which started so early might soon come to an end.  However, at Loffredo Farms, they say that the crop is so huge that they expect there will be fruit into October.  For as long as I can remember Red Havens have been the gold standard of peaches.  This year, in a season of superb peaches, they have, to my taste, and seconded by others to whom I have mentioned this, been something of a disappointment.  Although some have been juicy and delicious, others were mealy with no flavour, or just plain hard.

There were still elderberries at O.K. Farms.  With their crabapples, they will make great jelly.
Alas, there was an empty space where Haystrom Farms usually sells heirloom tomatoes and potatoes. Oh well, there's always next week.
Posted by the cookbook store at 9:14 AM